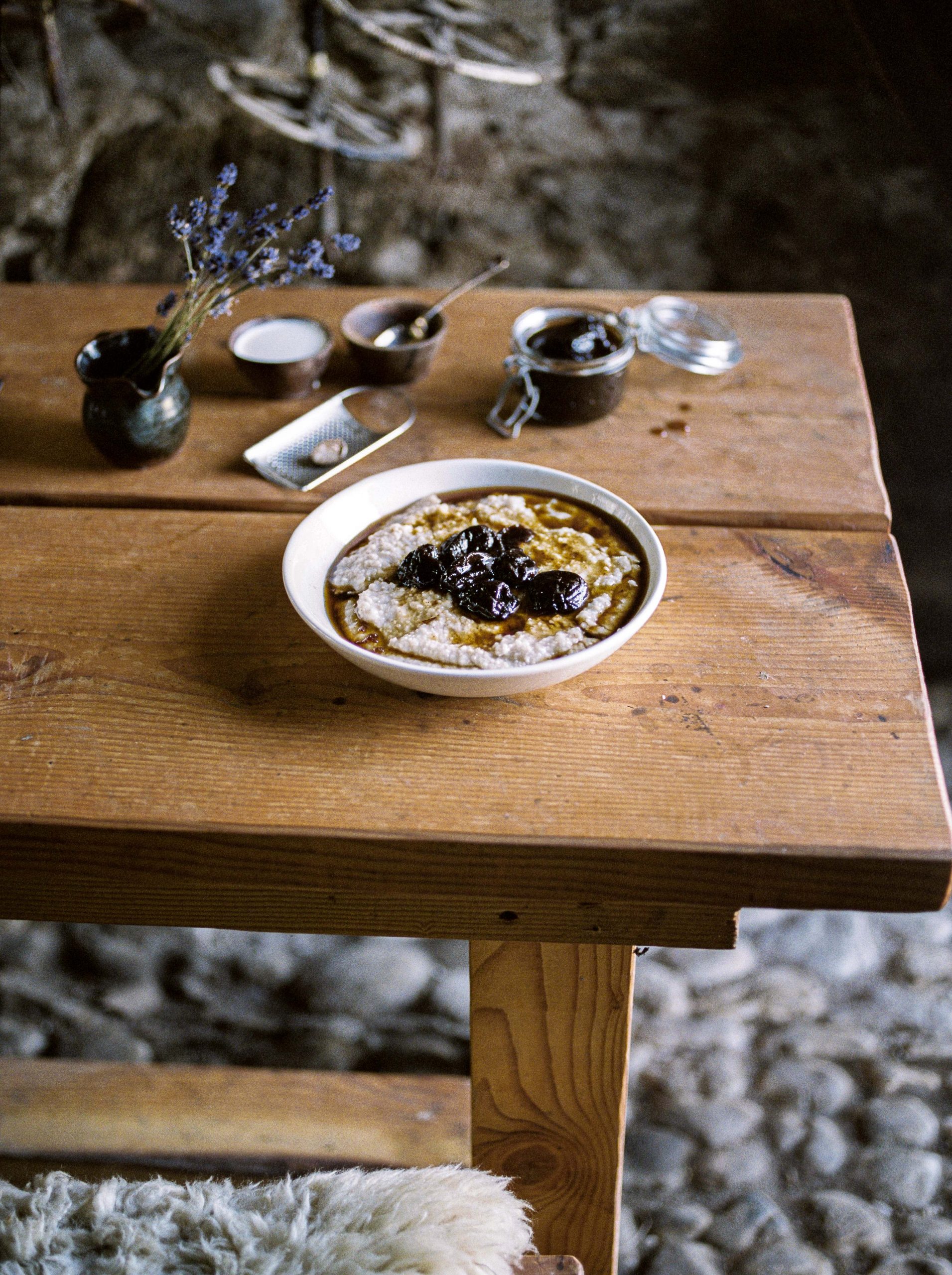 Featuring a hundred recipes gleaned along the way, ranging from the traditional to the contemporary, as well as the stories of the people met by author Ghillie Basan, A Taste of the Highlands is a magnificent celebration of life and food in one of the world’s most beautiful places. Try Ghillie’s twist on the classic combination of oats and whisky in the below recipe.

I thought it would be fitting to kick off this book with two things close to many a Highlander’s heart – porridge and whisky – a marriage made in heaven! The making of porridge can be quite personal – as can the enjoyment of it – with salt, brown sugar, honey, milk, cream, or none of these. Should it be thick enough to set in a drawer for the piece on the hill later, or should it be loose and creamy so it gently glides down the throat? And should it be eaten sitting down or standing up?

My father, a Highlander at heart with four generations rooted in the village of Braemar, was a man particular about his porridge. He liked it with salt, cooked until thick enough to stand a spoon in it, and served in a bowl with a cup of cold milk placed beside it. He would sit in the sunroom of his hillside home with a magnificent view over birch woodland to the Cairngorms and quietly dip his spoonful of hot porridge into the cold milk so that they didn’t mix before entering his mouth. If whisky was involved, it would be stirred into the porridge as it cooked, knocked back as a dram to chase the porridge, or splashed into poached prunes to spoon into his bowl.

For the prunes, I have chosen Tomatin 12 from a distillery that formed the settlement of Tomatin, from the Gaelic meaning ‘hill of the juniper bush’, to house its work force. This single malt is creamy and fruity with a buttery finish – a perfect combination for porridge, but in the same way that porridge making is personal, the enjoyment of whisky is too, so I suggest you just reach for a whisky
that you like.

Serves 3–4
For the prunes
175g stoned, ready-to-eat prunes
3–4 tbsp granulated or soft brown sugar
2 generous drams of Tomatin
12, or a whisky of your choice
For the porridge
225g pinhead or medium oatmeal, packaged by Golspie Mill
300ml water or milk
sea salt
a knob of butter (optional)
a grating of nutmeg, or a scant tsp cinnamon (optional)
cream, for serving (optional)

Put the prunes into a saucepan, pour in enough water to cover them and bring to the boil. Add the sugar and simmer for about 10 minutes, stirring from time to time, to make sure the sugar dissolves. Splash in the whisky and simmer for a further 5–10 minutes. Turn off the heat and leave to cool.

When it comes to making the porridge, it is really up to you whether you use oats or oatmeal and whether you cook it in water or milk. Make a pot of porridge in the way you always do, or follow this method for a creamy oatmeal version.

Tip the oatmeal into a bowl and pour in enough water to just cover it. Leave to soak overnight.

Drain the oatmeal through a sieve and tip it into a heavy-based pot. Add the milk or water with a little salt, according to your taste. Bring the liquid to the boil, then reduce the heat and simmer, adding more milk or water until you reach the consistency you like. Beat in the butter, along with the nutmeg or cinnamon if using, and ladle into bowls. Serve with the tipsy prunes, perhaps a drizzle of cream too.