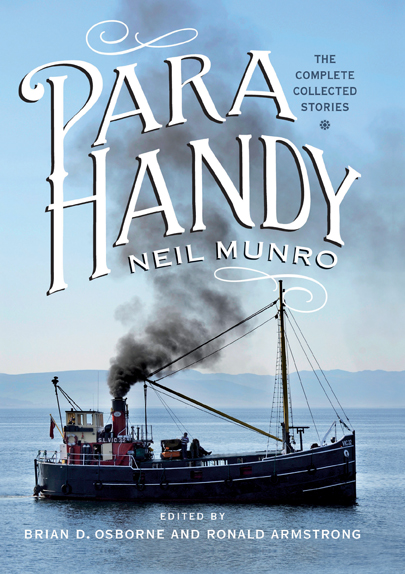 Time for a cuppa? Take a few minutes to laugh out loud with this extract from the first book published by Birlinn – Para Handy by Neil Munro

The crew of the Vital Spark were all willing workers, except the Tar, who was usually as tired when he rose in the morning as when he went to bed. He said himself it was his health, and that he had never got his strength right back since he had the whooping-cough twice when he was a boy. The captain was generally sympathetic, and was inclined to believe the Tar was destined to have a short life unless he got married and had a wife to look after him. ‘A wife’s the very thing for you,’ he would urge; ‘it’s no’ canny, a man as delicate as you to be having nobody to depend on.’

‘I couldna afford a wife,’ the Tar always maintained. ‘They’re all too grand for the like of me.’

‘Och ay! but you might look aboot you and find a wee, no’ aawfu’ bonny wan,’ said Para Handy.

‘If she was blin’, or the like of that, you would have a better chance of gettin’ her,’ chimed in Dougie, who always scoffed at the Tar’s periodical illnesses, and cruelly ascribed his lack of energy to sheer laziness.

The unfortunate Tar’s weaknesses always seemed to come on him when there was most to do. It generally took the form of sleepiness, so that sometimes when he was supposed to be preparing the dinner he would be found sound asleep on the head of a bucket, with a half-peeled potato in his hand. He once crept out of the fo’c’sle rubbing his eyes after a twelve-hours’ sleep, saying, ‘Tell me this and tell me no more, am I going to my bed or comin’ from it?’

But there was something unusual and alarming about the illness which overtook the Tar on their way up Loch Fyne to lift a cargo of timber. First he had shivers all down his back; then he got so stiff that he could not bend to lift a bucket, but had to kick it along the deck in front of him, which made Dougie admiringly say, ‘Man! you are an aawful handy man with your feet, Colin’; his appetite, he declared, totally disappeared immediately after an unusually hearty breakfast composed of six herrings and two eggs; and finally he expressed his belief that there was nothing for it but his bed.

‘I’ll maybe no trouble you long, boys,’ he moaned lugubri- ously. ‘My heid’s birling roond that fast that I canna even mind my own name two meenutes.’

‘You should write it on a wee bit paper,’ said Dougie unfeel- ingly, ‘and keep it inside your bonnet, so that you could look it up at any time you were needin’.’

Para Handy had kinder feelings, and told the Tar to go and lie down for an hour or two and take a wee drop of something.

‘Maybe a drop of brandy would help me,’ said the Tar, promptly preparing to avail himself of the captain’s advice.

‘No, not brandy; a drop of good Brutish spurits will suit you better, Colin,’ said the captain, and went below to dispense the prescription himself.

The gusto with which the Tar swallowed the prescribed dram of British spirits and took a chew of tobacco after it to enhance the effect, made Para Handy somewhat suspicious, and he said so to Dougie when he got on deck, leaving the Tar already in a gentle slumber.

‘The rascal’s chust scheming,’ said Dougie emphatically. ‘There iss nothing in the world wrong with him but the laziness. If you’ll notice, he aalways gets no weel when we’re going to lift timber, because it iss harder on him at the winch.’

The captain was indignant, and was for going down there and then with a rope’s-end to rouse the patient, but Dougie confided to him a method of punishing the malingerer and at the same time getting some innocent amusement for themselves.

Dinner-time came round. The Tar instinctively wakened and lay wondering what they would take down to him to eat. The Vital Spark was puff-puffing her deliberate way up the loch, and there was an unusual stillness on deck. It seemed to the Tar that the captain and Dougie were moving about on tiptoe and speak- ing in whispers. The uncomfortable feeling this created in his mind was increased when his two shipmates came down with slippers on instead of their ordinary sea-boots, creeping down the companion with great caution, carrying a bowl of gruel.

‘What’s that for?’ asked the Tar sharply. ‘Are you going to paste up any bills?’

‘Wheest, Colin,’ said Para Handy, in a sick-room whisper. ‘You must not excite yourself, but take this gruel. It’ll do you no herm. Poor fellow, you’re looking aawful bad.’ They hung over his bunk with an attitude of chastened grief, and Dougie made to help him to the gruel with a spoon as if he were unable to feed himself.

‘Have you no beef?’ asked the Tar, looking at the gruel with disgust. ‘I’ll need to keep up my strength with something more than gruel.’

‘You daurna for your life take anything but gruel,’ said the captain sorrowfully. ‘It would be the daith of you at wance to take beef, though there’s plenty in the pot. Chust take this, like a good laad, and don’t speak. My Chove! you are looking far through.’

‘Your nose is as sherp as a preen,’ said Dougie in an awed whisper, and with a piece of engine-room waste wiped the brow of the Tar, who was beginning to perspire with alarm.

They shook their heads sorrowfully, and the captain turned away as if to hide a tear. Dougie blew his nose with much osten- tation and stifled a sob.

‘What’s the metter wi’ you?’ asked the Tar, looking at them in amazement and fear.

‘Nothing, nothing, Colin,’ said the captain. ‘Don’t say a word.

Iss there anything we could get for you?’

‘My heid’s bad yet,’ the patient replied. ‘Perhaps a drop of spurits—’

‘There’s no’ another drop in the ship,’ said the captain.

The patient moaned. ‘And I don’t suppose there’s any beer either?’ he said hopelessly.

He was told there was no beer, and instructed to cry if he was requiring any one to come to his assistance, after which the two nurses crept quietly on deck again, leaving him in a very uneasy frame of mind.

Our poem of the week is ‘A Year, Aye?’ taken from Michael Pedersen’s dazzling collection Oyster. You can see Michael performing...
Read More
Next week we are publishing Six Wounds by Morgan Cry, a high-octane crime thriller set in the sun-drenched Costa Blanca and the second novel...
Read More
Chai is an Indian spicy, milky tea which makes a delicious, warming drink. The word chai is Hebrew and means ‘giving life’. It’s a great drink...
Read More