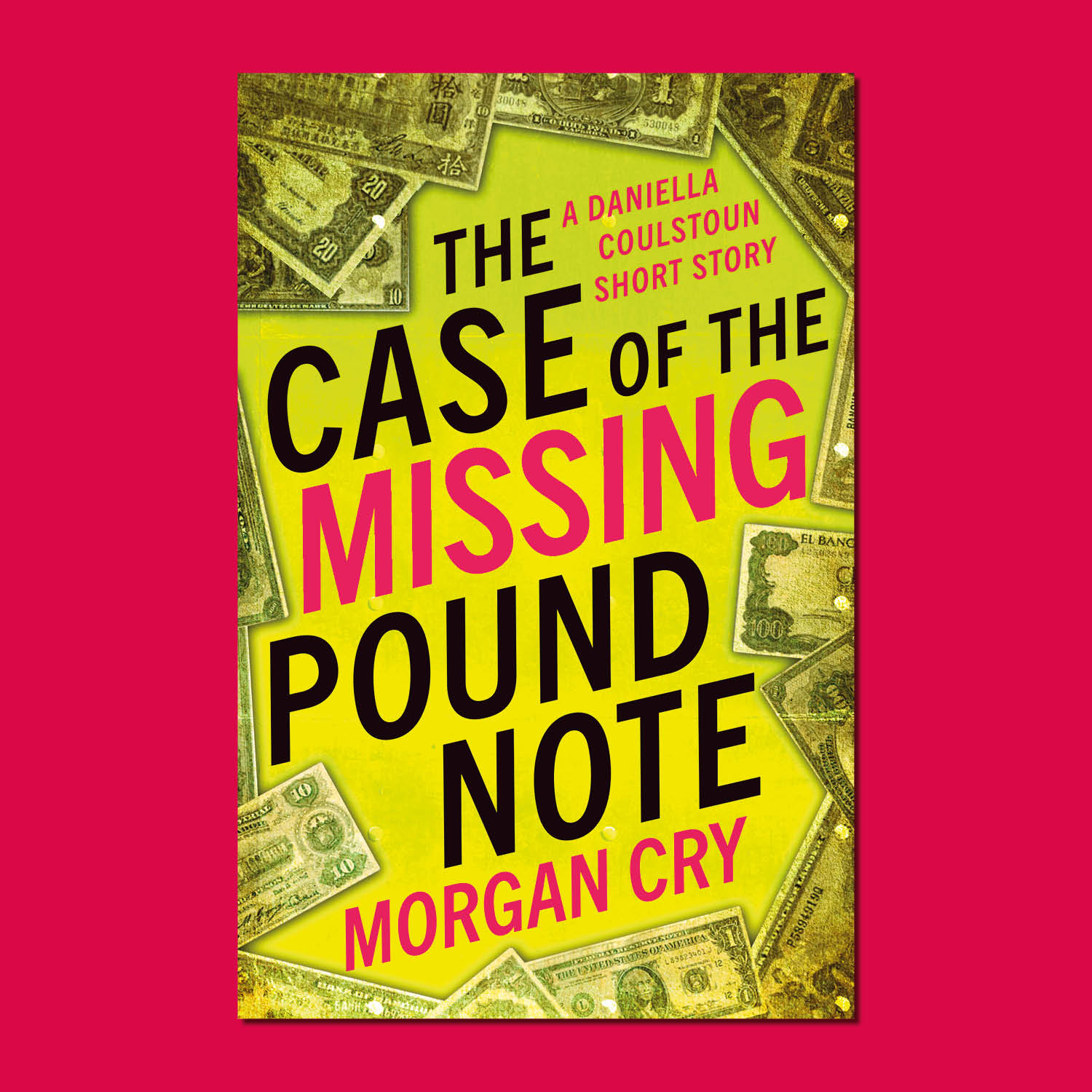 In May we are publishing Six Wounds by Morgan Cry, a high-octane crime thriller set in the sun-drenched Costa Blanca and the second novel featuring Daniella Coulstoun. To give readers a flavour of what to expect, Morgan has written a fantastic short story following another of Daniella’s exploits, The Case of the Missing Pound Note. Expect shady expats, some fruity language, and of course, a mysterious missing pound note. This is Part 3 of the story – click here to read the first part. We will be releasing this short story in sections each week until the publication of Six Wounds so check back next Friday for the next part!

‘Skid moved the note to the ceiling? When? Why?’ I ask, looking at Skid.

Skid’s phone makes a noise like a submarine’s sonar. ‘Bloody WhatsApp,’ he curses.

‘WhatsApp, Skid – when did you get that?’ asks Sheryl. ‘I thought you hated the idea. Only yesterday morning you blew a fuse at me for being on it.’

‘His buddy Mark got him to put it on his phone on the way back from the airport last night,’ says Zia.

‘Aye,’ says George. ‘That bloody submarine noise has been going off all morning.’

‘I can’t figure how to turn the sound off,’ Skid moans.

Clyde leans on the bar and answers for Skid: ‘Because when I was setting up the bar this morning the stupid note fell off the wall.’

‘After twenty years it chooses this morning to fall?’ I say.

‘So why did Skid put it on the ceiling?’

‘Because I wanted Skid out from behind the bar,’ Clyde says. ‘I’d been getting ready for the day, and about fifteen minutes after we opened Skid suddenly offered to help. Before I knew it, he was in the fridges sorting out the bottles. Skid never helps because he’s useless. In no time at all he was making a mess. So,’ Clyde says, turning to Skid, ‘I needed you gone. I was supposed to nip down to the panaderia for some bread but fixing your mess kept me behind the bar until Mark came in.’

I turn to Skid. ‘And where exactly did you put the note?’

‘Up there,’ he says, pointing to a spot near the front door. ‘In amongst the other ones.’

I look up at the clutch of green that marks out the UK section of the ceiling. There is no note with white writing on it.

‘And when exactly was this?’

‘Not sure, but I know it was after I read my horoscope in the paper,’ says Saucy. ‘Those notes are above my chair.’

‘I’m not sure, but it was when Sheryl yelped,’ Saucy says.

‘I heard the ping of a text and Sheryl cried out. Skid was mucking around up on the ceiling about then.’

‘The text was from Jordan,’ explains Sheryl.

‘Jordan texted you from inside the pub?’ I say.

‘No,’ says Jordan. ‘I wasn’t here first thing. I left my phone at the Safety Deposit + yesterday. Sheryl and I were working all day and I forgot it. I went back this morning to pick it up.’

‘And the text was to tell your sister you had the phone?’

‘Jordan was telling Sheryl about the note’s value.’

‘I saw Sheryl put her phone down on the table. She left the texts open and I could read the message. It was Jordan letting her know how much the note was worth.’

‘Okay, it’s true,’ she says. ‘Jordan texted me about the note. But he also texted earlier to tell me he had his phone back.’

She hands me the phone, unlocked, and I scroll down. I read and hand it back.

I look at the twins and then turn to everyone else. ‘And no one knew the note had vanished until after Mark arrived?

‘When Skid showed Mark where he had put it on the ceiling – that’s the first I knew that it was missing,’ says George.

‘Did anyone see someone take the note down from the ceiling between Skid putting it up and Mark arriving?’ I ask.

‘George was over there,’ says Skid.

‘I was not,’ George spits back.

George thinks on that. ‘Sorry, I did go over, briefly. I wanted the newspaper. Saucy had gone to the toilet and Skid had lifted it from the table. I took it from him and went back to my seat.’

‘Sheryl,’ I say, ‘you were near the notes. Did you see George take the pound from the ceiling when he was getting the paper off Skid?’

‘What the f—’ George shouts. ‘I never took the bloody thing.’

Sheryl shrugs. ‘I don’t know. I was on the phone.’

‘I was in and out of the cellar. I never saw anything.’

‘Skid, did you see George take the note down?’

‘I didn’t take the damn thing,’ snaps George as he pushes his coffee to one side. ‘Don’t you dare try to pin this on me.’

Skid winces as his phone makes the submarine noise again.

‘Look,’ interrupts George. ‘I took the newspaper from Skid and sat straight down. So why would I take the note? As far as I was concerned it was just another piece of pub tat. I hadn’t read the article and never got the chance to read it.’

‘Because Skid came jogging over and managed to tip his bloody drink all over the paper before I could open it. That’s why it’s soaking.’

‘I wasn’t paying attention,’ says Skid. ‘I wanted more ice for my drink and tripped.’

‘So I couldn’t have known about the note,’ George says. ‘Mark came in while I was cleaning up and I already told you he was the one who pointed out that the story was in the paper.’

I turn my attention to Sheryl. ‘Sheryl, after you got the second text from Jordan did you look for the note?’

Everyone is looking at her.

‘Okay, okay, I admit I had a look, but it was gone,’ she says. ‘Mark rushed in just after Jordan’s text on the value arrived. After Skid showed Mark where the note had been, I checked the ceiling and it was definitely not there.’

‘And I know every one of them. It’s my job to drag out that bleedin’ stepladder every few weeks, get up there and dust them all. If you don’t clean the things, clouds of crap start falling from the celling after a while. All that paper traps no end of filth. Leave it long enough and when someone slams the door it’s like standing under a shower of shit.’

‘Sure you didn’t take it. We all believe you.’ Skid’s sarcasm is blatant. ‘Daniella, she could have got it while we were all watching Mark.’ He slugs his drink. ‘Shit, this drink is too cold. Hurts my teeth.’

‘Skid, give it a rest,’ I say. ‘Sheryl, let’s be clear about this. You got that text from Jordan about the value but didn’t say anything to anyone?’

‘As I said,’ she points out, ‘the text came in just before Mark and Zia appeared. I didn’t need to tell anyone. Mark let everyone know as soon as he got here, double quick.’

I turn to Skid. ‘And how do we know you actually pinned it up there in the first place?

Saucy is crossing the bar for another drink. ‘Aye, he put it up there all right. You can’t miss the thing with all that white writing on it.’

‘And, Saucy, were you sitting at the table the whole time between Skid putting it up and Mark arriving?’

‘Apart from going to the bog, yes. Mark came in like a rocket with Zia in tow. Skid was near my table when Mark arrived and Mark shoved him out of the way.’

‘He hurt me,’ Skid says, rubbing a spot on his arm.

‘Then,’ continues Saucy, ‘Mark started waving the newspaper around before Skid pointed to the spot in the ceiling where he had pinned the note – and that’s when Mark really kicked off.’

‘Accused us all of stealing the note,’ says George. ‘Told us all about the reporter calling him. That he had flown all this way to get his note and threatened to call in the police. Zia tried to calm him down but he wasn’t for having it.’

‘He came in right after Mark and Zia, all out of breath,’ says Saucy.

‘I’d just got back from picking up my phone,’ Jordan says.

I walk to the bar. ‘Clyde, a glass of wine, please. This is supposed to be my day off, after all.’

I drop onto the stool next to George and close my eyes. I visualise the time between eleven, when the pub opened, and eleven-thirty when Mark came in. I conjure up George, Sheryl, Skid, Clyde and Saucy – and then add Mark, Zia and Jordan a little later. I sip at the wine, my heart beating a little faster than it should. Not because there is a thief in the room. Around here there is always a thief in the room. I just don’t want the local police in here or, worse still, the Guardia Civil.

Stealing a note worth a quarter-of-million pounds is jail time in anyone’s books.