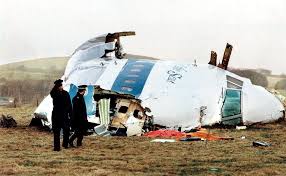 Newspapers around the world reported this morning that a five-part series centred around the 1988 Lockerbie Bombing disaster is in pre-production with Sky and an American streaming service and is expected to air next year. The series will be written by Oscar nominees Jim and Kirsteen Sheridan whose credits include In The Name of the Father and In America. It will explore the loss of 23 year-old Flora Swire in the disaster and the impact on her family. Flora’s father, Dr Jim Swire, has campaigned tirelessly to establish the truth about Lockerbie and maintains that the only person ever convicted of the bombing, Abdelbaset al-Mergahi, was the victim of a miscarriage of justice. He tells his story in The Lockerbie Bombing: A Father’s Search for Justice, a searing account of his three-decade search for the truth on behalf of all those who died. This is the book on which this screen production is based.

The bombing of Pan Am Flight 103 over the Scottish town of Lockerbie in December 1988 remains the deadliest terrorist attack to have taken place in Britain. In all 270 people were murdered.

An official announcement on the series from Sky and Peacock states:

‘All 259 passengers and crew were killed when the bomb exploded over Lockerbie 38 minutes after take-off, with a further 11 residents losing their life as the plane came down over the quiet, Scottish town.

‘Thirteen years later, in 2001, Libyan national Abdelbaset al-Megrahi was convicted of the crime and later released on compassionate grounds in 2009.

‘Shortly after the Lockerbie bombing, one of the worst terrorist attacks in history, some families of the victims joined together to launch a campaign for truth and justice.

‘Among them was Dr Jim Swire, whose campaign has taken him to the sand dunes of Libya to meet face-to-face with Colonel Gaddafi, to 10 Downing Street to meet with successive prime ministers and to the corridors of power in the US where he worked with the American victims’ groups to mount pressure on Washington for tighter airport security, well before 9/11.’

Jim and Kirsteen Sheridan said: ‘The bombing of Pan Am Flight 103 was one of the world’s deadliest terror attacks that continues to have widespread implications for the meaning of justice in the US, Scotland and Libya.

‘Over 30 years on, this series takes an intimate and very personal look at the aftermath of the disaster, and we are grateful to all of those, particularly Jim and Jane, who have entrusted us to tell their story, and the story of their loved ones, on screen.’

Read the press stories in The Independent, The Herald and The Scotsman