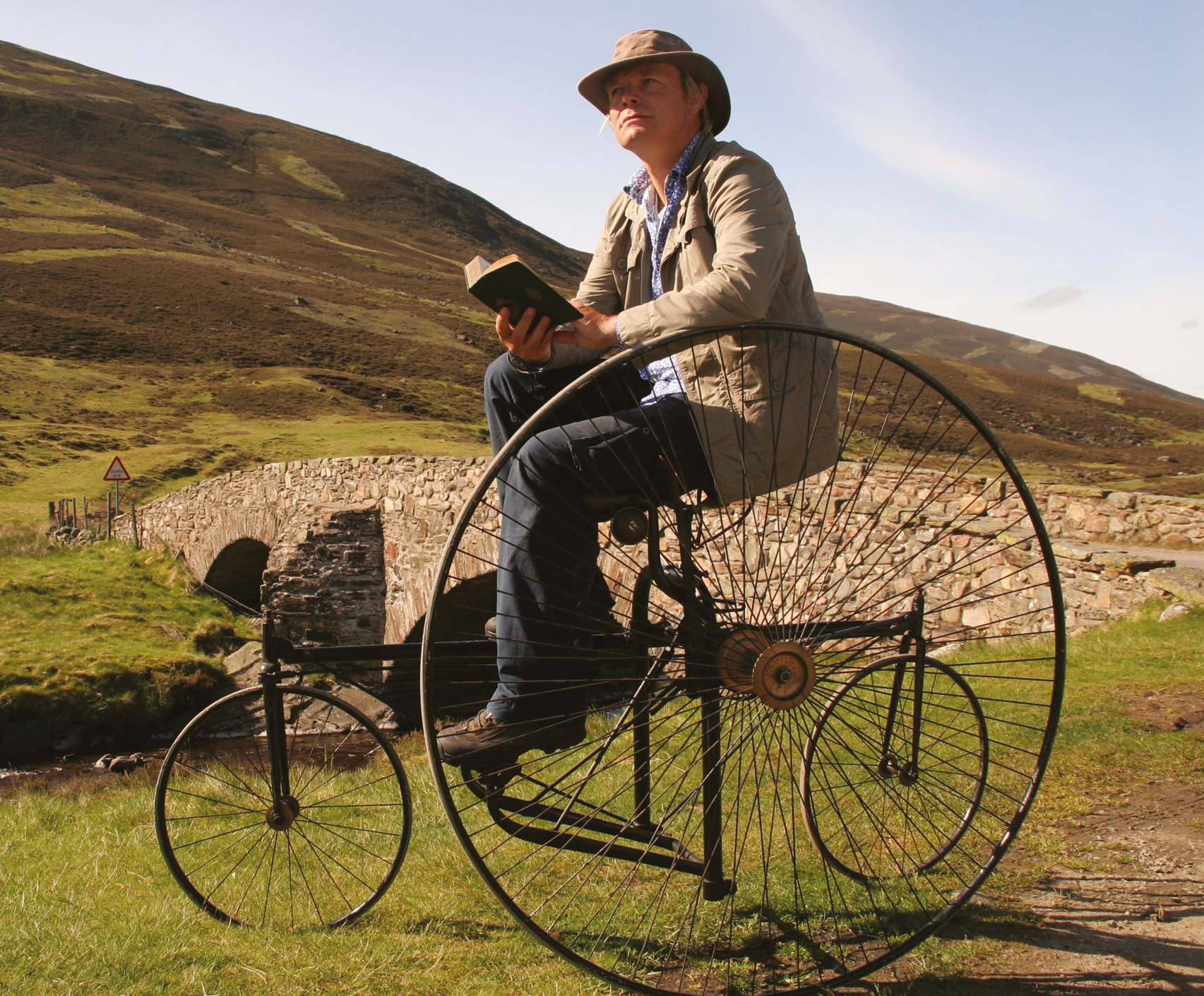 Paul Murton, a documentary filmmaker known for The Grand Tours of Scotland, journeys the length and breadth of the spectacularly beautiful Scottish Highlands in his new book, The Highlands. The below extract follows Paul’s journey from Dunkeld to Pitlochry, as Paul reminisces on his unusual mode of transport around Dunkeld.

Extract from The Highlands by Paul Murton

The picturesque town of Dunkeld is another Highland gateway. It sits on the north bank of the Tay where the river narrows to a pinch point beneath high crags before flowing eastwards towards the Lowlands and the city of Perth.

The first time I explored Dunkeld properly was several years ago when I arrived in town on a Victorian tricycle. This was during the filming of the very first series of Grand Tours of Scotland. To fully immerse myself in the project, I’d enthusiastically embraced the idea of travelling through the Highlands as early tourists had done, and I was keen to use various forms of period transport to experience the country from an authentic, historical perspective. When I was presented with an original Rudge Lever Tricycle, manufactured in Coventry in the 1870s, I didn’t realise just how difficult and painful Victorian locomotion could be. I soon found out.

Pumping hard on the pedals, every bone in my body rattling, I bumped and swayed dangerously towards Dunkeld wondering what I would find. My 1886 copy of Black’s Guide was effusive: ‘There are few places of which the first sight is so striking as Dunkeld; its finely wooded mountains, its noble river, its magnificent bridge, and its ancient cathedral, combine to forma picture of rare beauty.’ I hoped so. All the effort I was expending demanded a substantial reward.

Avoiding cars and pedestrians without mishap, I negotiated the narrow streets of the old town centre, rattled over the Cross where once markets were held, and made for the cathedral – the most striking and historic part of Dunkeld. Leaving my tricycle outside the iron gates of the cathedral grounds I was struck by the sight of a building made of two distinct halves: one ruined and the other a functioning place of worship.

There has been a Christian centre on the banks of the River Tay at Dunkeld for close to 13 centuries. The original church is said to have been founded around AD 730 by Celtic monks. A century later, after the kingdoms of the Picts and the Gaels were united, the church was rebuilt. Shortly afterwards, the holy relics of St Columba were brought from Iona to Dunkeld in order to protect them from marauding Vikings. With Columba’s relics in safekeeping, the religious community beside the Tay flourished, becoming the centre of Scottish Christianity.

The cathedral was built, rebuilt and modified over the centuries. Most of what can be seen today dates from the 13th century. But the work of generations was destroyed twice – first during the Protestant Reformation of the 1560s, and then in August 1689 during the first Jacobite rising.

After the Battle of Killiekrankie defeated government forces fell back on Dunkeld, where they took up defensive positions around the cathedral. Outnumbered four to one, they waited for the pursuing host of 4,000 Jacobite clansmen to attack. The battle, when it came, lasted for 16 hours, with fierce house-to-house fighting. During the onslaught, much of the town was burnt to the ground, including the cathedral. With Dunkeld a smouldering ruin, the Jacobites retired and disappeared into the hills. The eastern half of the cathedral nave was eventually roofed over and became a place of worship again. The rest of the building was left open to the heavens.

In a dark corner of the cathedral was the tomb I wanted to see. It dates from the 1390s and is one of the oldest royal monuments to have survived in Scotland from the Middle Ages. On an elaborately carved stone platform lies the effigy of a knight in armour, arms crossed over his breastplate, his mailed hands pressed together as if in prayer. This pious figure represents none other than Alexander Stewart, the notorious Wolf of Badenoch – one of the wickedest characters in Scottish history.

Alexander was born in 1343. He was one of the illegitimate sons of King Robert II, who had fathered a large brood of children to various women. When Alexander’s father married his mother, the bastard son of the king was retrospectively legitimised. He was then sent to the wilds of Badenoch to rule the north of Scotland on behalf of the crown. Instead of playing the king’s ambassador, Alexander terrorised and pillaged much of the Highlands, earning him the sobriquet ‘the Wolf’. How ironic then, that the godless Wolf of Badenoch now lies beside the High Altar in Dunkeld Cathedral in a tomb that bears the inscription: ‘Here lies a good man’.

Perched precariously on the uncomfortable seat of my Rudge Lever Tricycle, I set off across the bridge that spans the Tay at Dunkeld. The present bridge was built by the Scottish civil engineer Thomas Telford and opened in 1808. Previously, there had been at least one medieval bridge over the Tay, but like its predecessor it was destroyed by various ‘great floods’ over the years. For several decades, until Telford’s bridge was built, travellers wishing to cross the river had to take one of two ferries, which by all accounts was a journey that was sometimes fraught with danger. In 1766, the East Ferry was carrying 13 passengers and four horses when an oar broke. The ferrymen momentarily lost control. The craft was swept downstream in the strong current, until it hit a pier and filled with water. In the chaos, the horses jumped overboard. Some passengers survived by holding onto them, the others were carried away by the river. Six were drowned.

Telford’s bridge connects Dunkeld with the village of Birnam on the south side of the Tay. Birnam, a name that resonates with historical and literary associations, is famously mentioned by Shakespeare in Macbeth. In the play the witches meet Macbeth on the ‘blasted heath’ and call out to him: ‘Macbeth shall never vanquish’d be until Great Birnam Wood to high Dunsinane Hill shall come against him.’ Macbeth is reassured by this prophesy – and in the invincibility it suggests – until Birnam Wood does indeed come to his castle at Dunsinane. The wood isn’t a supernatural army of tree-like Ents from the Lord of the Rings, it’s a host of warriors hiding behind branches cut from the great wood of Birnam.

The Callanish Stones in Lewis are one of Scotland’s oldest manmade structures, and many people visit them at sunrise on the summer solstice in...
Read More
Summer Solstice – the Longest Day Extract from Native: Life in a Vanishing Landscape by Patrick Laurie Battering heat and a dry wind to take your...
Read More
“I never had a childhood,” James Baldwin told a French interviewer in 1974. To a journalist ten years earlier, he proclaimed, “I did not have...
Read More