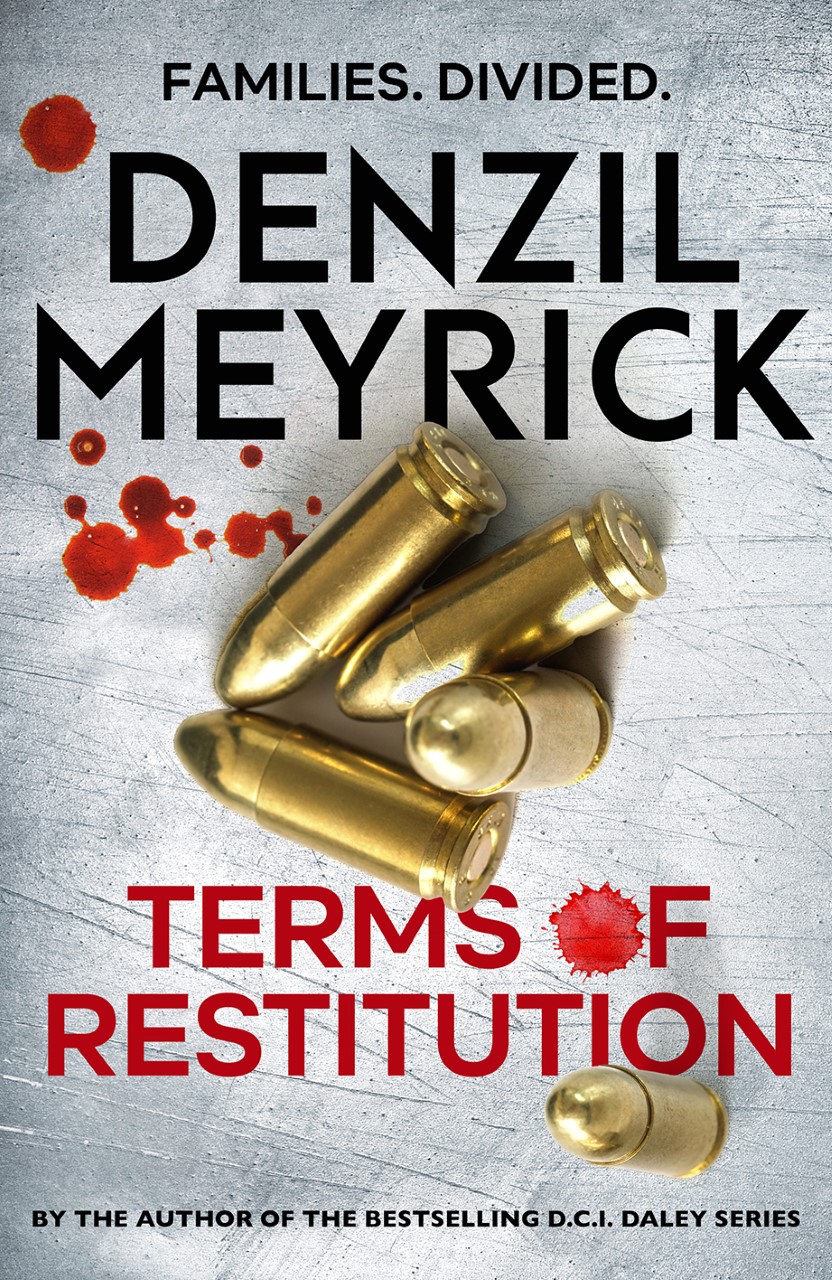 We are delighted to announce the forthcoming publication of a gangland thriller Terms of Restitution by Denzil Meyrick: September 2021

From the author of the bestselling DCI Daley crime novels, Denzil Meyrick, comes something completely different – a modern-day gangland thriller. For fans of The Sopranos and Gangs of London, new novel Terms of Restitution is set in the dark streets of London and the Scottish town of Paisley.

Denzil Meyrick is known for producing storylines that stand tall in the world of crime fiction, so embedded in the reality of rural and small-town policing that grateful readers across the globe have been gripped. With one million copies of the DCI Daley novels sold across all formats, this master storyteller is now reaching out with a new voice and in a new direction. Meyrick reveals the darker side of human nature and transports the reader through a dark underworld with writing that is at once superbly researched, taut and effortless. Put yourself in Meyrick’s hands – you will not be disappointed.

Is this a scintillating one-off? Or will it be the start of a must-buy new series? We know superfans throughout the world will be thrilled to find out. AND if they can’t wait, a brand new DCI Daley novel is published next month, For Any Other Truth. Click on the title now for more info.

I’m absolutely thrilled to bring readers something new. Those of you who have followed my work will know that I’m a huge fan of the Sopranos TV show. The mix of visceral crime, family life and bags of humour – I think – more accurately represents real life than unremittingly dark noir. It’s no surprise to me that the HBO show has become the world’s most popular TV drama during lockdown.

Thinking about that model, I’ve used my own approach in TERMS OF RESTITUTION. Nobody lives a single-themed life, and I believe it’s really important – if any authenticity is to be had – that characters inhabit as real and relatable world as possible.

In TERMS OF RESTITUTION, we see the stresses and strains of life on Zander Finn, as he struggles to come to terms with the pressure of two families. One blood relatives, the other his business. I’m also excited to unveil another cast of characters, with strong female leads like DCI Amelia Langley, and Maggie Finn, the formidable matriarch of both families. All told, along with the setting in Paisley, a town I know well. I’m more than excited to let you spend time with the Finns in TERMS OF RESTITUTION.

Gangland boss Zander Finn is so sickened by the brutal murder of his son in a Paisley pub that he decides to change his life. Following the advice of his priest and mentor, he moves clandestinely to London and becomes an ambulance driver. But when his old second-in-command Malky Maloney tracks him down on a London street, Finn knows he must return. Both his real family and his crime family face an existential threat from Albanian mobsters determined to take control of the Scottish underworld.

Facing the forces of law and order under Detective Chief Inspector Amelia Langley and a mysterious Italian woman, Finn struggles for survival in a rollercoaster ride of brutality, tenderness, misplaced loyalties and the utterly unexpected. The path to redemption is a bumpy one, and it begins to look like Finn should have stayed in London.