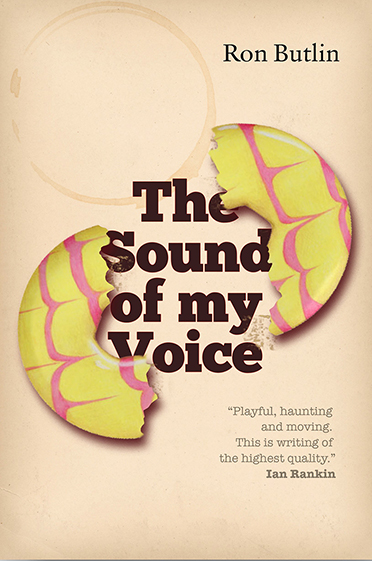 Spring has finally sprung, and it’s the perfect time to get outside with a good book! To inspire your choice, Kristian and I bring you the latest episode of our podcast The Hitchhiker’s Guide to Scottish Literature, where we will be celebrating one of Scotland’s finest contemporary writers, Ron Butlin. We have just published a new edition of Ron’s brilliant debut, The Sound of My Voice, a definite cult classic – famous fans include Irvine Welsh, James Robertson and Ian Rankin – and a novel that really deserves a place on your bookshelf! We’ll be talking to Ron Butlin later on in the podcast about his debut and his varied and prolific output. We round off the podcast with Ron performing a couple of his poems from The Magicians of Scotland.

The Sound of My Voice is a gem of book that looks at how we choose to live – or not – when the reality of our lives does not meet expectations. Its protagonist, Morris Magellan, has a well-paid job, a smart house and garden, a loving wife and two kids, and a raging alcohol problem. In beautifully-crafted, pin-point prose, we delve into the inner turmoil of Morris, confused about his past, particularly his relationship with his father, and unable to look forward, unless it’s to his next drink. Though the book revolves around a serious subject matter, it is full of great humour and empathy, whether we are with Morris at work in the biscuit factory or feeling every nuanced moment between him and his wife, Mary.
It’s had amazing reviews, with Butlin being compared to Saul Bellow, Franz Kafka and James Kelman, and those who have read the novel really, really love it:
‘Playful, haunting and moving, this is writing of the highest quality . . . One of the most inventive and daring novels ever to have come out of Scotland’ – Ian Rankin
‘One of the classic post-war Scottish novels. It’s simply a roaring success on all levels; it’s a genius piece of fiction’ – Irvine Welsh
‘A profound and beautifully written study of human fragility in the face of the brutalism of modern life’ – James Robertson
‘Artistic, insightful, philosophical, psychological. Above all it is human and compassionate. At its core is a kindness and an attempt at understanding the worst of times with the belief that only then can we appreciate the best of times. Few writers have the ability, and indeed, the desire to examine and understand what it means to do more than simply exist as Ron Butlin does’ – Scots Whay Hae
So, we think it’s time you should read the best Scottish novel you’ve never heard of, now that you’ve heard of it!
Vikki Reilly, May 2018
Books also mentioned in the podcast were The Magicians of Edinburgh, and Steve and Frandan Take on the World
You can listen to this episode, and catch up on previous episodes, on iTunes and on SoundCloud:

Our favourite crime writers, Doug Skelton and Denzil Meyrick are back after an 18 month hiatus with their much loved podcast SBooks. To kick start...
Read More
I’m a bit hit and miss with BBC Radio 4 these days. Some of the programmes are truly world class, others leave me cold and struggling to understand...
Read More
A Poem for Burns Night by Alexander McCall Smith Give us your hand – here’s ours: All Scotland, though a little quieter now, Is a bit happier in...
Read More