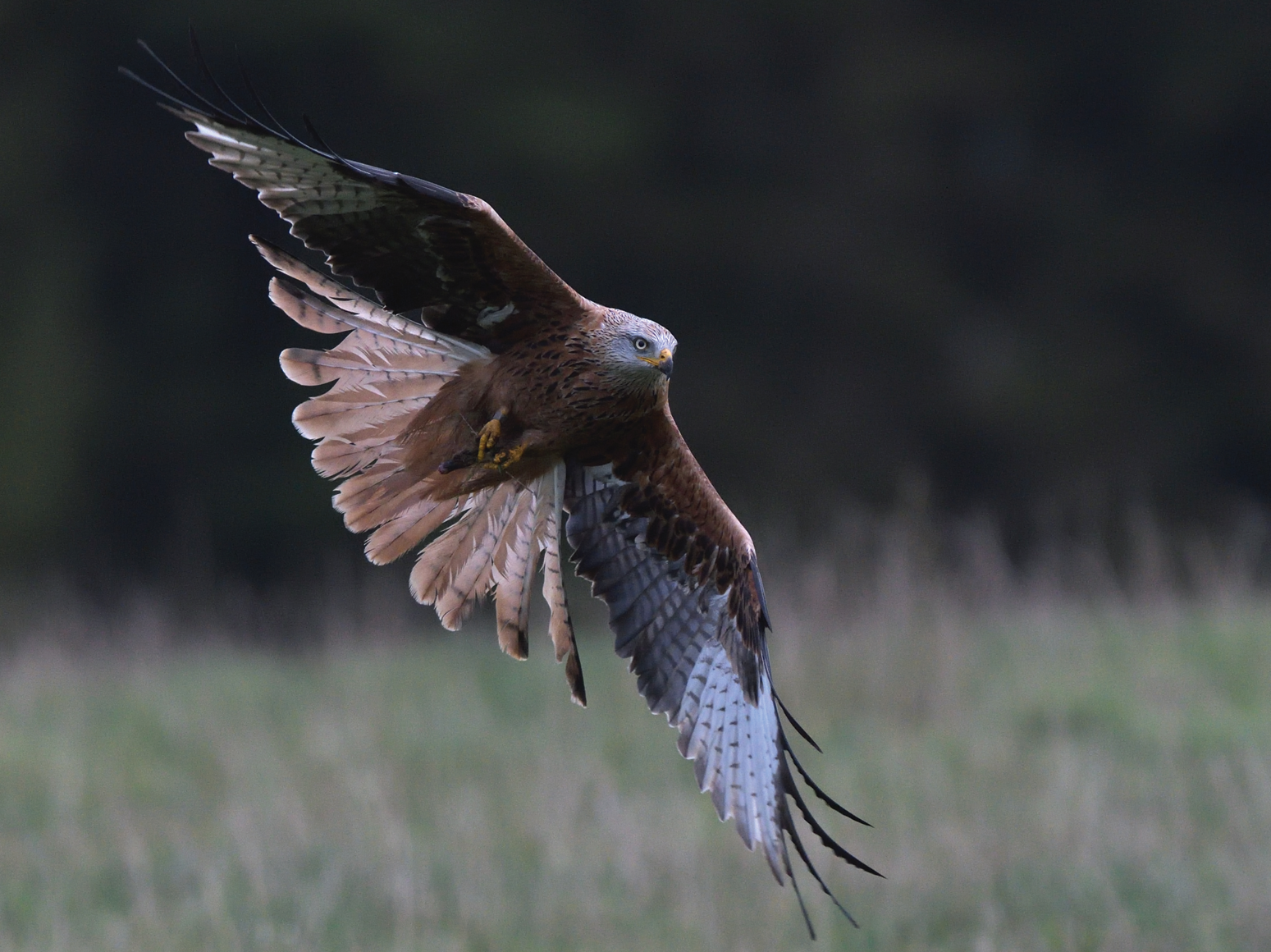 Red kites were once Britain’s most common bird of prey. By the early 1900s they’d been wiped out in Scotland and England following centuries of ruthless persecution. When some reintroduced kites began roosting on their 1,400-acre farm at Argaty in Perthshire, Tom Bowser’s parents, Lynn and Niall, decided to turn their estate into a safe haven. Tom’s new book, A Sky Full of Kites, is the story of the Argaty Red Kite project, and also a story of his personal relationship with farming and conservation. In this extract, Tom discusses his decision to move back to the family farm, and his conflicted feelings about his future in farming. This comes to a head when his best friend Mike decides to leave Argaty, and Tom resolves to carve a path for himself.

Extract from A Sky Full of Kites: A Rewilding Story by Tom Bowser

It was only ever meant to be a short-term arrangement, but I found I enjoyed seeing more of my parents and learning about the kites from Mike. More than anything I loved being back at Argaty, being home. Print journalism (the only kind that held any interest for me) was on its knees back then: staff were being laid off and papers were dying a slow death, so pursuing that life would have been hard. It was online news that was growing. The farm offered a more comfortable, unthreatening alternative. The temporary fix soon became permanent, and the journalism was quietly jettisoned. Mum and Dad seemed pleased to have me there. My paternal grandmother, a wonderful and powerful woman who has since passed, was apparently delighted too. I loved her without knowing her overly well. The Bowser side of the family is big, in every sense. Big in number, big in personality. In their company the younger me – so quiet, so mousy – tended to go unnoticed. And yet my grandmother wept when she heard I’d returned home. That touched me then. It still does now. People were waiting upon my decision. That had never previously occurred to me.

I spent eight years farming with my dad, learning to work collies, shift sheep, drive cattle, fix tumbled dykes, mend broken fences, lamb ewes and all of the many other constituent parts of the job. Occasionally I’d also deliver the kite talk when Mike had days off. The idea was that I would one day take over the farm and Dad would retire. In truth I never really wanted to be a farmer, never thought I’d be good at it, never felt comfortable with the knowledge that we produced animals for slaughter. I can admit that now. I couldn’t at the time. And because I couldn’t I made no moves to allow Dad to step back, no plans for the future, and those big dreams Mike and I once spoke about remained just that.

Now Mike had had enough. I’d lost him. As I lay there in the silent hours of early morning, thinking of the awful night that had just passed, one moment came back again and again.

‘I can’t wait to see what you’ll do with Argaty,’ he’d said.

At first I’d mistaken his meaning, thought I’d heard some affirmation in his words.

‘He knows I will do something special with the place,’ I’d told myself. ‘He knows it wasn’t all talk.’ A second later my brain had caught up.

‘I can’t wait around to see what you’ll do with Argaty.’ That was what he’d meant. I knew that I’d feel just as he did were our roles
reversed. And I hurt like hell.

Mike leaving would mark the culmination of a tough few years. I’d shredded my knee playing football, almost lost a finger in a horrifically bloody and painful farm accident, had my back give out as a result of the weakened knee. All my life I’d been fit, healthy, able to do whatsoever I wished. Now my body was like a vehicle you were afraid to drive any distance for fear it broke down on you. More recently, restored to half-fitness, I’d gone through another year’s lambing. It had ended badly, with the horrible death of a lamb. Normally this wouldn’t have unsettled me. Growing up in a farm environment, you see a lot of deaths. In your head you know it’s sad, but eventually that sadness stops penetrating your heart. This time it had been different. I had had to euthanise the lamb. I’d never done that before, had always managed to absent myself and leave the job to someone else. There’d been nowhere to hide on this occasion. I’d come home that night deflated, flopped down on the sofa and told Sarah about my day.

‘Are you sure you can do this for the rest of your life?’ she’d asked.

‘What do you do with a place this size if you don’t farm it?’ I’d replied with a helpless shrug. ‘I love it. I don’t want to have to sell
it.’

Nobody knows me like my wife. Nobody hits the nail on the head quite as she can. Although she’d let the matter drop, her question had stayed with me, giving me no peace. Now, facing up to a future without Mike, I revisited it. Could I really do this for the rest of my life? Much of what had sustained me to that point was the company. With Mike gone and Dad talking of retirement, the future looked a very lonely place. For so long I’d been ducking big questions – Was I suited to farming? Did I want to be a meat producer? – but I couldn’t hide from them forever. There would come a time, no doubt when I was carrying this place alone, when they’d become too big to avoid. What to do instead, though? I was thirty-three, with an employment record of false starts and failures. Then there was the eternal question: what to do about Argaty?

Amid all these worries and unhappy thoughts, one positive idea did come to me. When Mike left, someone would have to manage the kite project. I loved the kites and had always enjoyed running the tours. It was something I felt I did well, even if I was merely filling in on Mike’s days off. At present the kites could hardly be considered a full-time job – chopping meat for them and delivering the talk took a couple of hours at most – but might it give me something to build on? Was there some way of scaling it up, making it into a career?

After so many years of indecision and inactivity, it seems unbelievable now, but within the space of a few hours I had the beginnings of a plan; an embryo at most, but more than I’d had in years.

Later that morning I found Dad in the shed, feeding the cattle. I stood beneath a shrivelled old sheaf of holly, suspended from the roof years earlier in the belief that its medicinal properties cured calves of ringworm disease. When he’d finished feeding, I asked if we could talk.

For the first time in my life I found I couldn’t look him in the eye.

I wanted to say more, to explain that this wasn’t a rejection of the things he and Mum had worked for, that I’d never felt pressured into farming by them. Any sense of obligation had come from within, from my desire to make them, and the rest of the family, proud. I wanted to tell him how sorry I was for wasting everyone’s time. I hadn’t wanted to disappoint anyone, so had kept on going. I wanted to say so much, but I couldn’t. I’d have burst into tears.

And my dad – my strong, unflappable dad – did the best thing he could have done. He nodded and said, ‘That’s okay. Tell me
what you want to do.’

Those weren’t happy beginnings – losing my friend, shedding that old, ill-fitting skin . . . these things left their share of bruises – but they spawned something good. My life did indeed change. At last I did those things I once boasted I’d do. I began working to
enhance the wildlife on Argaty.

As this work gathered momentum I started to think about the kites, those wonderful birds that had made all of this possible. I found I wanted to know more about them, to untangle their history and understand how they’d come to be in my life. So I began researching, following a trail back through the centuries. The information was out there, scattered across various sources. Little of it had been collated. I’ve sifted through it all and selected quotes that tell a story that has largely been overlooked in modern history: the story of red kites in Scotland. It’s a remarkable tale. I hope you’ll see just what a miracle it is that these birds are back in our skies again.

The kite story is just one of the things I want to tell you about in this book. I also wish to tell the story of Argaty Red Kites, of my family and friends, and of the work we’ve done to restore kites to our small corner of the world. By the closing pages I hope you’ll know who we are and why all of this matters so much to us.

Lastly, I want to tell my own story. From those troubled days in 2017, something wonderful has grown and Argaty is changing. Already we’ve greatly improved conditions for wildlife on our home. In the years to come we’ll make them even better. In putting this down on paper I’m leaving a record of the period when all of this began – from 2017 to 2019 – a happy, sad and ultimately wonderful period of our lives.

The life I lead now is very different to the one I led when this journey began. That is all thanks to those beautiful fork-tailed raptors that first soared into our lives and claimed our hearts more than two decades ago. This book is my love letter to them.

Our historical fiction offerings for 2022 will take you on an extraordinary journey, from the aftermath of the Battle of Bannockburn to the Nazi...
Read More
Our music titles this year explore music heritage and social history from Edinburgh to the White House, and include brilliant anecdotes about...
Read More
We have an exceptionally strong poetry offering this year, with new titles from Jenni Fagan, Hannah Lavery, and Alicia Pirmohamed, as well as a...
Read More