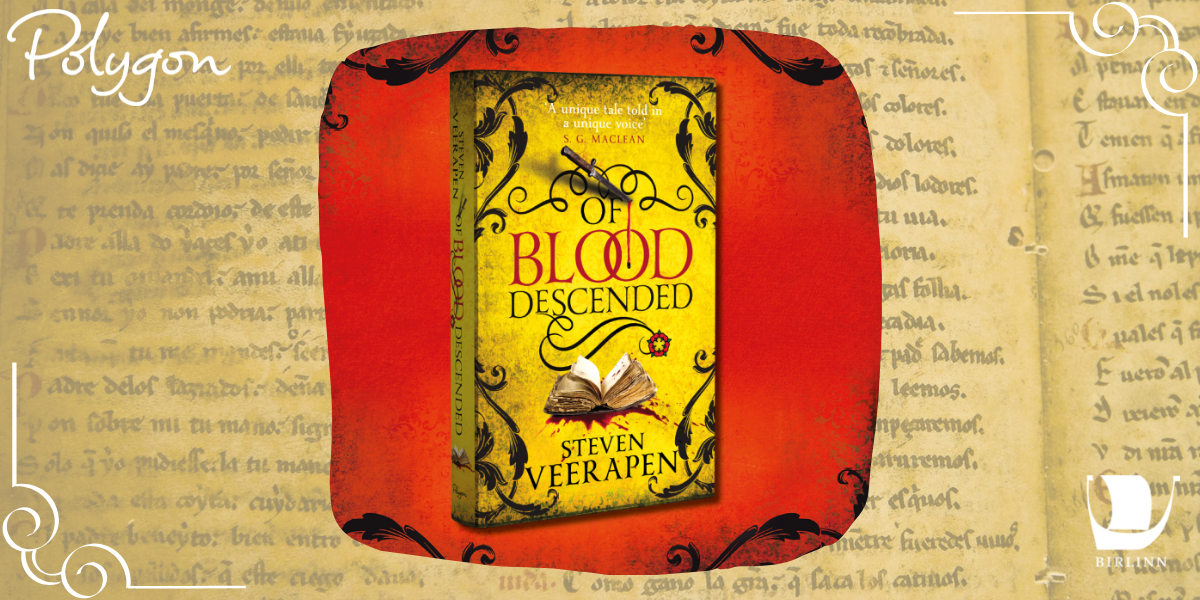 Steven Veerapen’s thrilling new book, Of Blood Descended, was published just this past week. Set in the summer of 1522, this book follows the court of Henry VIII, as they welcome the Imperial emperor, Charles V. Anthony Blanke, the son of the king’s late ‘black trumpet’, John Blanke. Anthony is called to Hampton Court by his former employer, Cardinal Wolsey. The cardinal is preparing a gift for King Henry: a masque of King Arthur and the Black Knight. Anthony is to take centre stage.

The festive mood, however, quickly sours. Wolsey’s historian, charged with proving the king’s descent from King Arthur, is found murdered, his body posed in a gruesome tableau. A reluctant Anthony is charged with investigating the affair. His mission takes him on the path trod by the historian, through ancient monastic libraries and the back streets of London.

On a journey that takes him from Hampton Court to Windsor and Winchester, and which sees him lock horns with secretive monks, historian Polydore Vergil, and a new face at court, Anne Boleyn, he must discover the murderer, secure the great masque, and avoid King Henry’s wrath.

This following extract comes from the very beginning of the book, setting the scene for the chilling action to come.

The wherry’s oars splashed, dug, and rose, battling the morning current. The Thames had grown quieter out of London, less packed with boats and birds, but the steady, brackish water never gave up its dumb rush towards the city. A scattering of reeds added their own futile resistance, brushing the hull with skeletal fingers.

For a moment we passed into shadow – a brief respite – as the water-gate arched above. And then the sun reclaimed us. ‘’Ere we are,’ said the grunting bull of a waterman. Needlessly, of course. The graceful red towers and gilt cupolas had been visible for a while, the palace haughtily shrugging its shoulder against the bankside trees and the curve of the river. Besides, I knew the road – the waterway, I should say – to Hampton Court, though I hadn’t been near it in two years. Nor had I been near any of Cardinal Wolsey’s glorious riverside palaces, or city ones, or hunting lodges, or townhouses. I didn’t reply but gripped the hard edges of my wooden bench whilst he set to work slowing us down, turning us, or whatever the terms are such men use in their trade. He was good; I scarcely felt the wherry rock and pitch as, for a moment, it caught on the current.

Peacefully now, having declared victory over the tide, the little boat was washed up to the calm of the landing stage. ‘A good one that, heh? Fancy a turn in that?’ asked the waterman, jerking his head – and nearly losing his flat cap – as we slid past the cardinal’s barge.

God save us from wherrymen who insist on making conversation!

I gave him a brief, ‘Ay,’ and looked politely at the greater craft. It was new: I hadn’t seen it before. However, in years past, I had sailed on things like it. It rode low in the water, a great, graceful, gilded swan. At its prow stood a cross, at its stern, a carved wooden cardinal’s hat. Near the latter was the enclosed, windowed area – glass, mind you, no horn or oiled paper on a thing like this – where Wolsey might hide from the elements and entertain guests. As we passed the front of the barge, I could see where I might have sat, had I still been one of the great man’s musicians: on a red-carpeted dais near the prow, so that my trumpet might blast word ahead that he was coming.

And then the barge was past, and we were approaching the landing steps. These weren’t the crumbling, weed- choked steps of London, uneven and carpeted with dog turds; no, they were pure marble, glistening in the hard afternoon sunlight. It was difficult to believe that Hampton Court was even in England; it might have been lifted, from landing stairs to chimney tops, from some Italian romance and deposited on its pleasant bend of the river beyond the smelly city.

With the imperial emperor visiting, the people had gone wild, drinking all day and singing all night, cursing the French openly in the streets and crying, ‘God save the Queen! God save the Emperor!’ I hadn’t taken part in the festivities myself, but I’d heard the cannon being fired from the Tower not far from us in Aldgate, followed by the shattering of glass in the houses near to the citadel of those fool enough – or rich enough – to glaze their windows. And my stepmother had bombarded me with the street news, with all the zeal of a witness, whilst I’d hidden in my bed the previous afternoon, the lockram blanket over my head a barrier against women’s jangles.

‘And there were big painted shields – you’ve never seen the like – huge things – and two huge men dressed as Greeks. Great big men, with beards, in furs – furs – dancing and bowing right prettily. And all those arches, right over the street, like canopies, all twined with vines and flowers. And the king – oh, son, the king – he looked beautiful, he did. And the emperor . . . not so very big. Odd sort of face, that one. Sharp chin, too big to be real. Like a mask. Smiling, right enough. But a queer sort of smile, not big and open like our king’s. More like he was laughing at all that pomp and prettiness. To himself, like.’ Then, hurriedly, ‘Oh, but he’s good Queen Catherine’s nephew and she wouldn’t let no man marry her daughter unless he was a right good man, would the good queen. Oh, if only she’d been there, sweet Catherine . . .’ And on and on she had droned, sweetening the air of my bedchamber with her grand images and her reveries.

Yes, I was glad to be out of London and its frenzy of holidaying.

Steven Veerapen was born in Glasgow to a Scottish mother and a Mauritian father and raised in Paisley. Pursuing an interest in the sixteenth century, he was awarded a first-class Honours degree in English, focussing his dissertation on representations of Henry VIII’s six wives. He then received a Masters in Renaissance studies, and a Ph.D. investigating Elizabethan slander. Steven is fascinated by the glamour and ghastliness of life in the 1500s, and has a penchant for myths, mysteries and murders in an age in which the law was as slippery as those who defied it.

Steven Veerapen will be officially launching Of Blood Descended at Waterstones Edinburgh West End on Tuesday 24th May 2022. To book your tickets to attend the book launch event, please visit the Waterstones website.

Get your copy of Of Blood Descended & keep reading!

“I never had a childhood,” James Baldwin told a French interviewer in 1974. To a journalist ten years earlier, he proclaimed, “I did not have...
Read More
The following short story plunges readers into the gritty crime and blazing sun of the Daniella Coulstoun series, and offers a taster of what to...
Read More
Other Worlds is a captivating collection of poems devoted to the sights, sounds, and feelings of Scotland’s islands. Editor Stewart Conn has...
Read More