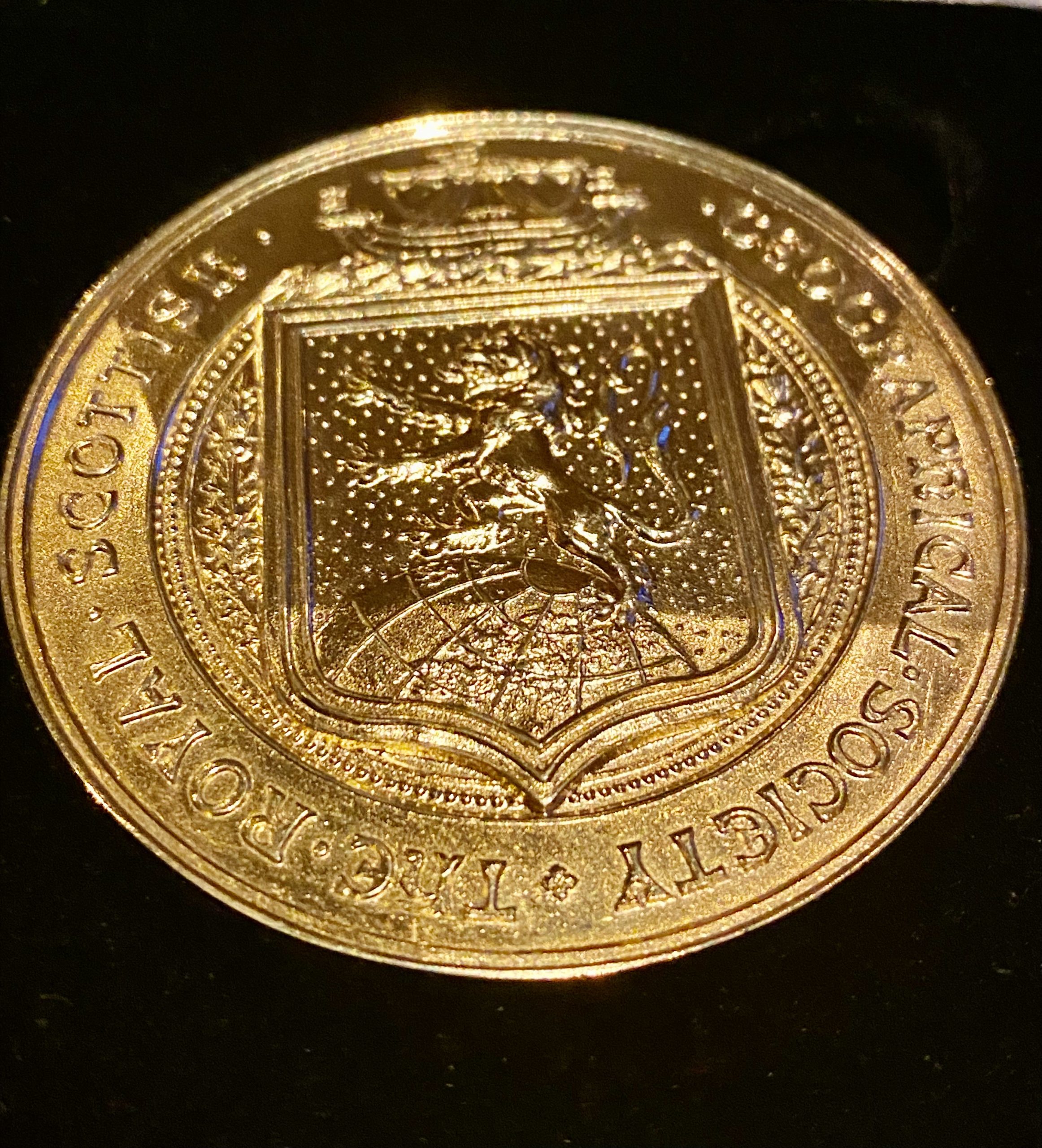 In his opening address at the award ceremony, held at the French Institute in Edinburgh, Professor Roger Crofts, former chair of RSGS, referred to Hugh Andrew as the ‘Vital Spark’ of Scottish publishing. In doing so, he harked back to the days when Mr Andrew took his first step into publishing by re-issuing Neil Munro’s beloved short stories of Para Handy and his trusty puffer, the Vital Spark.

Professor Crofts then passed the microphone to Professor Emeritus Charles W.J. Withers, former Ogilvie Chair of Human Geography at the University of Edinburgh and himself a Birlinn author.

Professor Withers commented on the wealth of mapping projects published by Birlinn including the limited editions of the John Thomson Atlas of Scotland, The Survey Atlas Centenary edition, The Blaeu Atlas, and Daniell’s Scotland. Hugh Andrew also saw into print Scotland Mapping the Nation, Scotland Mapping the Islands, Scotland Defending the Nation, Edinburgh Mapping the City, Glasgow, Manchester, Newcastle, Oxford, The Clyde and to cap it all the wonderfully written and beautifully illustrated, Land of Mountain and Flood, the Geology of Scotland.

He went on to remark that, ‘the power of words is to educate about our own country, educate about other countries, to make us think, to inform, to enlighten. Geography does all of these things and it does it so well in Scotland because of Hugh Andrew and Birlinn publishers.’

Professor Withers, who has worked on a number of books with Birlinn, further commented: ‘I was going to say the Birlinn firm – and it is a firm of course – but my sense of it is … a family. People come as interns and stay for years. There is a great sense of common purpose. I always get that sense of common role and voice and shared vision. That has been recognised of course; the Saltire awarded Birlinn Scottish Publisher of the Year in 2017.

‘Birlinn is a special publishing house and has a special place in life and letters in Scotland and further afield. And that it does so is because of Hugh Andrew.’

Prof Roger Crofts then conferred upon Hugh Andrew of Birlinn Ltd the Honorary Fellowship of the Royal Scottish Geographical Society and the society’s Shackleton medal.

‘I have been in publishing for 30 years and in that time I have commissioned some 2000+ books. I’ve always wanted Birlinn to have Scotland at its heart – we publish good books that come from Scotland and are very often about Scotland. Every book comes from somewhere and it is about conferring a sense of place and identity on that work. The mapping books that we have published are very important to me in that respect. There is also a great appropriateness in the Shackleton medal; one of the books that made an incredible impression on me when I was younger was the Folio Society edition of The Shackleton Boat Journey, and indeed I republished it a few years ago. We have had the best edition in print for a number of years now and of course Shackleton was here in the earlier years of his life. Such an extraordinary and powerful story.

‘One of the most moving stories is that of John Francis Campbell, lamplighter and storyteller of Islay. He went round the Western Isles and Argyll collecting Gaelic folklore at the end of the 19th century ­– millions and millions of words of folklore. By doing this, by collecting these stories, he gave the people he had collected them from importance and value. Crucially, the older generation realised – because someone they thought was important came round – that these stories were important too, and so they transmitted them to the next generation. So alone in Europe (with Norway), Scotland managed to preserve oral tradition into the era of recording instruments and created one of the greatest archives of folklore in Europe. Across the rest of Europe it died but thanks to one man it was preserved here. And to me this is the hugely important activity of a publisher. In preserving the memory of the past, we give a hope and identity for the future. Of course, we are a commercial company. Of course we try to make money in our own quixotic way. But more than that, it is about the preserving the memory and identity of a nation and building it anew for a future generation. For me, Shackleton as an explorer was a particularly moving memory because it is always a journey of exploration of the past, of the present and for the future.

‘I thank you very much for this medal. It means a very great deal to me to have this recognition.’

Aye Write is back for 2022 with a live programme of over 200 events. Tickets are now on sale for all all three weekends from 6th to 22nd May. The...
Read More
Neil MacGregor, presenter of The Museums that Make Us programmes on BBC Radio 4 and known throughout the world for his earlier series, A History of...
Read More
Did we have a cracking start to Spring last week? Yes we did… at the launch of Alternatives to Valium in a brand new bookshop, and with a...
Read More