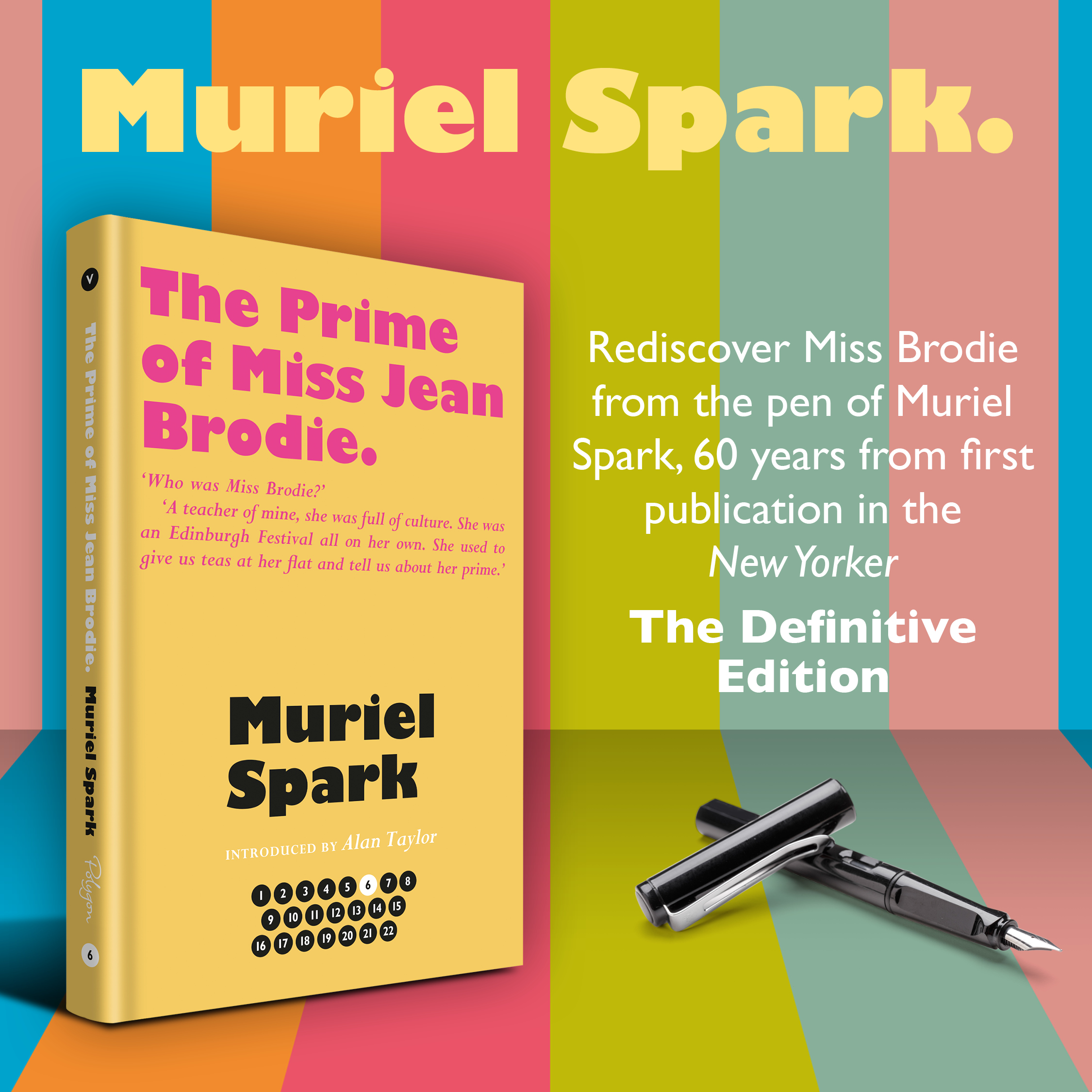 The Prime of Miss Jean Brodie by Muriel Spark – first published SIXTY YEARS ago this week.

Muriel Spark’s The Prime of Miss Jean Brodie, set in the heart of the city of Edinburgh in the 1930s, was first published not in book form but on the pages of The New Yorker magazine. It went on to be published as a book later in the same year, 1961, by McMillan Publishers and today, some 60 years later it is still hailed as a masterpiece.

Without doubt The Prime of Miss Jean Brodie was at the time – and remains today – the most popular and best known of Spark’s 22 novels. It was turned into a play and then a film – with Maggie Smith firmly at the helm as teacher Jean Brodie, a role for which she was awarded the Oscar for Best Actress.

To mark the centenary of Muriel Spark, Polygon – supported by the Muriel Spark Society – re-published all of her novels in a handsome Centenary Hardback Edition. These volumes have since been accepted as the definitive editions of her work, each novel introduced by a fellow writer or someone who knew her well. For The Prime, it was journalist, author and friend to Muriel – Alan Taylor, who wrote the introduction, commenting:

‘The Prime of Miss Jean Brodie is near perfect in its design and execution. It is at once traditional and experimental. Rich in period detail, it is nevertheless as spare and taut as one of Simenon’s thrillers and as light as a soufflé’

Alan Taylor, from his introduction to The Prime of Miss Jean Brodie

A full set of the 22 books was deposited in every library in the country and every secondary school in Edinburgh. And a remarkable, sell-out evening was held in the City’s Usher Hall attracted writers Ian Rankin, Alexander McCall Smith, Rosemary Goring, Alan Taylor and playwright David Greig along with the country’s leading actors – to speak about and read from the author’s work.

At the same time, Alan Taylor wrote a memoir of time spent with his friend, Muriel Spark, Appointment in Arezzo: A Friendship with Muriel Spark – a beguiling, deliciously insightful, gossipy, informative and quite delightful book.

Fellow Scottish author, playwright and academic Ali Smith gave a lecture at the National Library of Scotland and the Edinburgh International Book Festival in that same year. As part of the Centenary celebrations, Polygon published the lecture in book form, In The Spirit of Spark.

‘I’d read The Prime of Miss Jean Brodie, the book

about the woman who was ‘an Edinburgh Festival

was seventeen years old, and I’d known then,

after reading it, that a novel could be a new

kind of poetry, and that anything was possible

– Ali Smith, from In the Spirit of Spark

The Prime of Miss Jean Brodie has entranced and influenced since it first appeared on these pages of The New Yorker. Robert McCrum included the novel in The Guardian’s 100 best novels, commenting that this novel was:

‘a sublime miracle of wit and brevity, and a Scots classic that’s a masterclass in narrative construction and the art of ‘less is more’.

Watch an event in celebration of the Anniversary, at the National Library of Scotland. Click here.