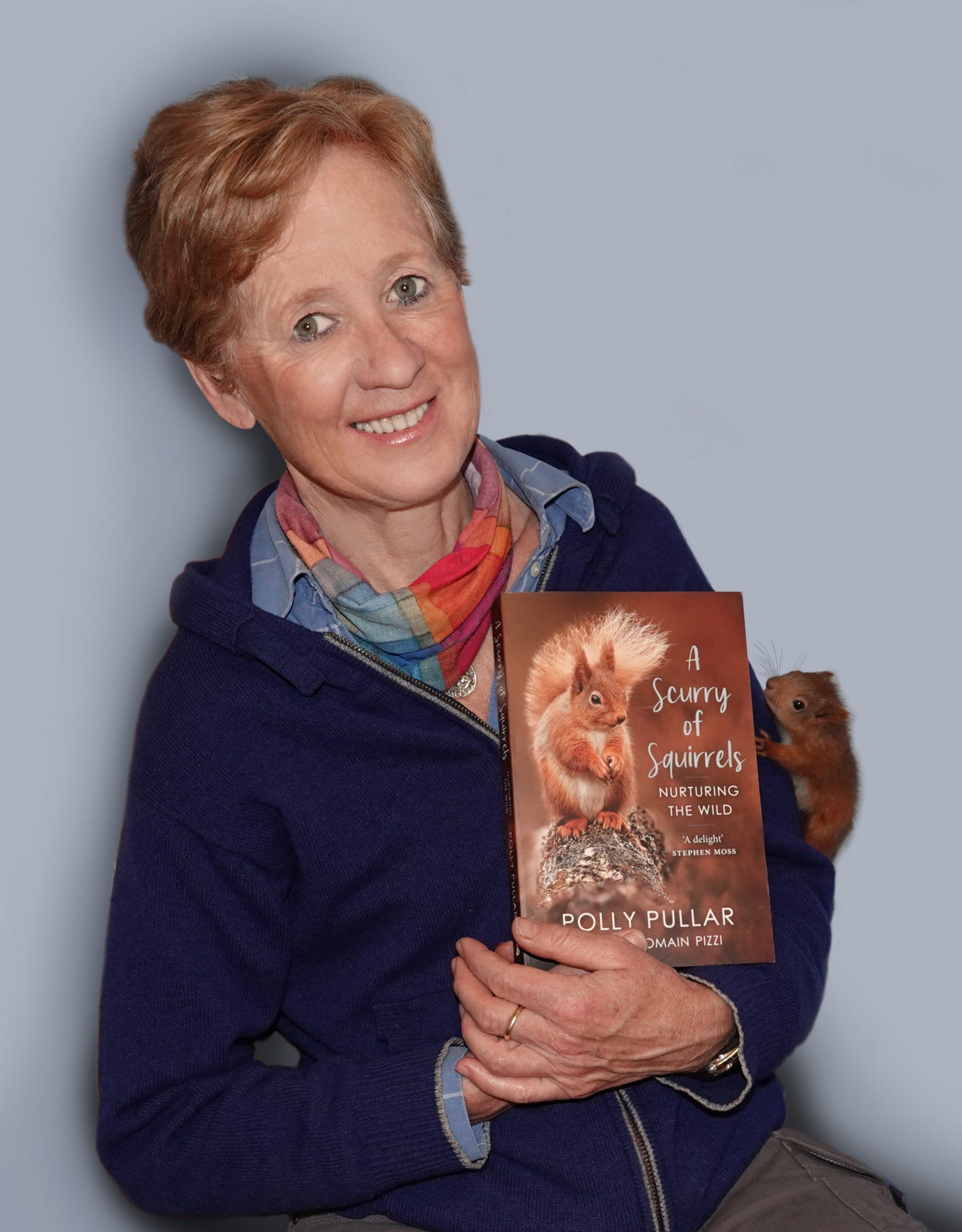 This month we published A Scurry of Squirrels, the new book by Polly Pullar which tells of her work in wildlife rehabilitation, and her lifelong passion for red squirrels. The below extract details the exciting moment when Polly first spotted red squirrels at her Perthshire farm, some years after moving there.

Extract from A Scurry of Squirrels by Polly Pullar

Some seven years after I moved into the new farm, I had the first excitement of a squirrel appearing on the birds’ peanut feeder. To begin with there was just a single male – and though we do not usually give wild animals names, this one was nicknamed Baldrick as he was moulting badly and was certainly not a prime specimen. First he lost the top half of his little red coat, as usually happens during the spring moult, and then later the bottom half. Baldrick caused us concern as he was always scratching. Watching him through binoculars we could see that the large bald areas were bleeding and sore. His visits were erratic over the next three years, but with his very distinctively marked two-tone tail we continued to be able to recognise him. He would then disappear for weeks on end. Though there were clear signs of other squirrels in the area and we had plenty of sightings, few others actually came to the garden until the spring of 2012, when we had an epic squirrel year. It began with the appearance of another male, who had only one eye – this made him very easy to identify. Then two more squirrels appeared and began to use the special nut boxes we had put up for them. We bought a bag of hazelnuts in the shell – these were greedily consumed, though later in the year when I was planting bulbs and digging the vegetable patch, I discovered a great many of them uneaten all over the place and left them in case the planters remembered where they had cached them.

By late spring we could recognise four different animals, though the one-eyed boy had vanished. Over that summer three very tufty youngsters made an appearance too. We noticed that no two squirrels ever shared the nut boxes or feeders at the same time, as one always drove a new arrival away. There were constant arrivals and departures and when Iomhair put up a third box on the aviary, this too was used every day. We feed the squirrels a mixture of peanuts, hazelnuts and pine nuts – all of which cost us a fortune.

A fourth, much smaller, baby appeared later that summer, clearly from another litter. Its big feet seemed wildly out of proportion with its little body. It was quite hard to work out who went with whom, though it was possible to see signs of lactation in two adult females.

Scrub is a word that is often used dismissively – ‘it’s just scrub’ is an excuse I often hear when I complain to people about their indiscriminate clearing and felling of important habitat both in their gardens and the surrounding area in spring and summer. It is usually also accompanied by the thoughtless comment ‘the wildlife will go elsewhere’. And I always want to know, ‘but where?’ The farm is surrounded by scrubby woodland that is highly valuable for red squirrels and so much else besides. Largely consisting of hawthorn, blackthorn and large swathes of hazel, as well as a few beautiful mature pines, oaks and ash trees, it is good habitat for many species. Sadly, the ash is badly afflicted with the horrible ash dieback disease (Hymenoscyphus fraxineus), a fungal disease that causes leaf loss and crown dieback, and many are looking very sick indeed. As Dutch elm disease wiped out the elm, it seems that the same fate faces the glorious ash tree; its loss will leave a gaping void in the British countryside.

I continue to fill the garden with plants to attract wildlife and have amassed a collection of various crab apples planted in the hen run and small orchard. Blackbirds, redwings and fieldfares feast on the little brightly coloured fruits, particularly during protracted spells of hard weather, and the roe deer like them too. Due to the deer I have long since given up trying to garden properly and no longer buy exotic plants as they are quickly annihilated by these voracious cervine horticulturalists – roses are devoured with gusto so I have planted the wilder rambling types that actually seem to thrive with a little unselective deer pruning.

That first notable squirrel year was a blissful time for us. It was as if we were being given a little reward for all the planting that had taken place. Then one day in early autumn no squirrels came. Not even one. From days dominated by on average three peak visits – early morning, early afternoon and teatime, all the squirrels appeared to have vanished like snow off a dyke. It happened so quickly. We were very concerned. I kept telling myself that there was a glut of autumnal food out there; the wild hazel bushes were laden with fat nuts, and there were plenty of berries about too. The garden seemed like a desert without the captivating squirrel activity. We felt bereft. Friends who also have squirrels in their gardens rang to ask for advice. Why had their squirrels vanished like this? They had simply gone. This was not a gradual lessening of visits but more of a mass exodus. Worrying indeed. I reassured them that it was perfectly natural behaviour and that their visitors had probably found better wild food that year. But there were moments when it was hard not to think the worst. Had something sinister happened?

The nuts in the boxes went mouldy and had to be thrown out, and we continued to fret that the squirrels had either met some grim end or succumbed to disease – though thankfully currently there are no greys in our area, there are plenty of other diseases that might have killed them. Like parents that worry incessantly about their children, garden owners all around the country become so involved and attached to these delightful visitors that their loss, even for a few months, always leads to concern. Three months passed with fleeting sightings of squirrels in the surrounding woodland, but there were still none in the garden. Then one day, just as they had vanished, four returned. One-eye was there first, though he had been absent all summer, and then two females appeared together with another male. Even though most years the same thing happens, it never stops us from being fearful that one day our squirrels may not return. However, squirrels follow the food source; wild is always preferable, so when it’s good elsewhere, off they go.

In the winter most of our squirrels grow spectacular ear tufts, though on occasions some have none at all. All of them have distinctive colouration and features and I try to keep photographic records to build up a detailed ID picture. It’s impossible to count squirrels accurately, but the resident population appears to be fairly stable. Inevitably there are good years and bad, as is the case with all wildlife breeding cycles. And it’s important to remember too that the weather will always play a part in the success and fecundity of every animal and bird.