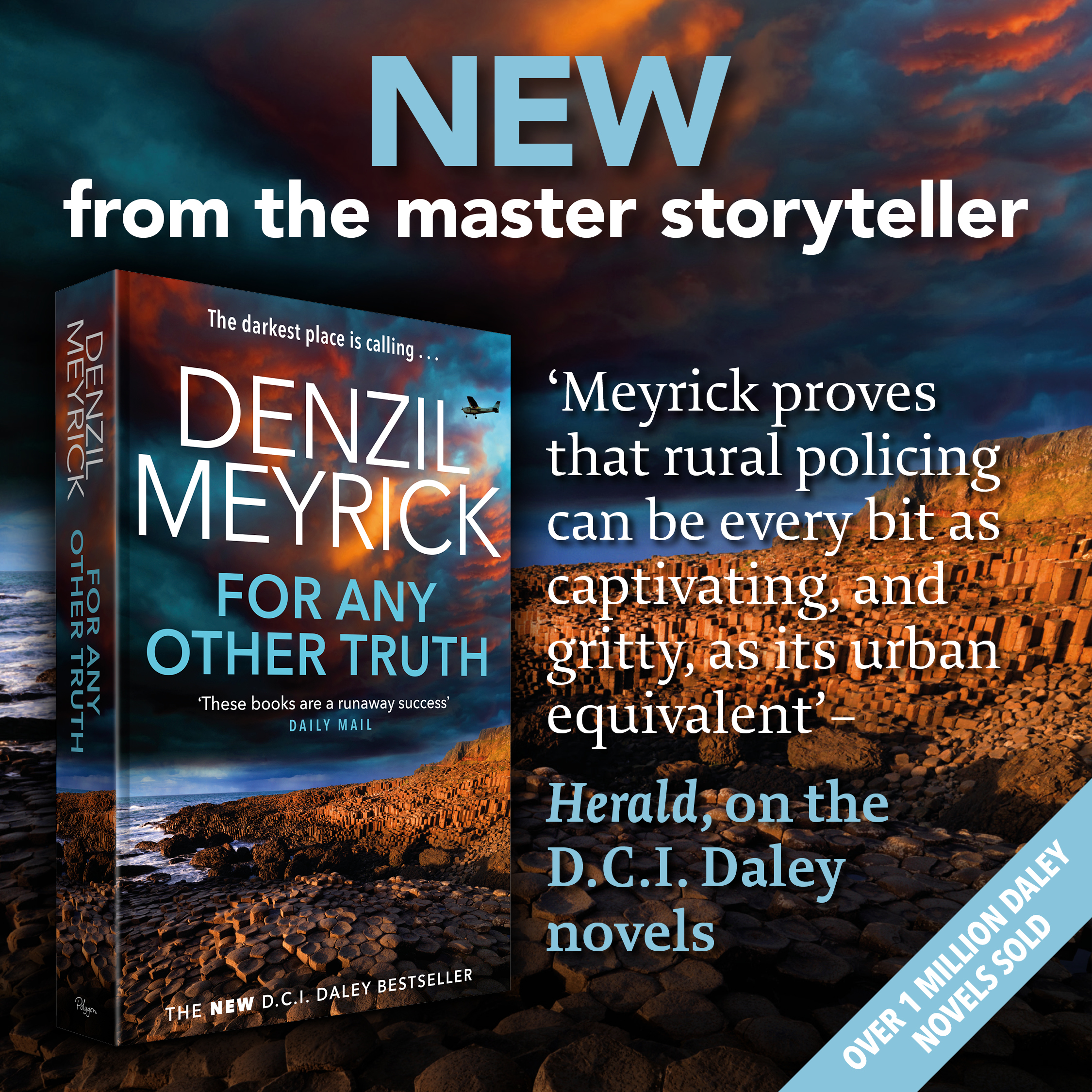 When a light aircraft crash-lands at Machrie airport, DCI Jim Daley and his colleague Brian Scott rush to the scene. But it soon becomes clear that both occupants of the plane were dead before take-off. For Any Other Truth is the ninth instalment in bestselling DCI Daley series by Denzil Meyrick, and is available now in paperback, eBook and audiobook formats. Whet your appetite with this excerpt from the first chapter of the book.

Extract from For Any Other Truth by Denzil Meyrick

From the Kintyre peninsula, the great ball of the setting sun appeared to hover above the straight line of the horizon as though reluctant to make its passage beneath the waves. The glowing orb seemed desperate to cling on to its hold over the white sandy beaches, the mountains, fields and rolling hills, desperate to hang on to the day. It shimmered above a molten sea, still flecked by its fading sparkle. It called across the great expanse of time to all those who had witnessed this spectacle, for nowhere else did it set with such majesty – or so the good folk of Kintyre would tell you.

Across Islay and Jura settled a purple fringe, framing the islands in a luminescent glow, while to the south the sliver of land that was Ireland shimmered in the remnant of heat from what had been – for this part of the world, at least – a stifling day. The flash of the Antrim light was no more than a glint now. But soon, against the velvet curtain of the short night of stars, already embarking upon their twinkling dance across an unsullied sky, it would shine brighter than the sun.

Mandy Roberts first heard the aircraft while walking her dog on the Isle of Gairsay. She scanned the golden summer evening sky and noticed a small plane flying low over the North Channel.

Aircraft of all shapes and sizes were common in the skies above the island. But few flew at that altitude. As the plane banked to the right her eyes followed its likely flight path. She reckoned it was making for Machrie airport near Kinloch. Mapping out the terrain between Gairsay and there in her mind’s eye, she supposed that, with no major obstacle in the way, it would be okay to fly so low – but still the journey would be nip and tuck.

Mandy pulled her mobile phone from her pocket and considered reporting what she’d seen to the authorities – but who?

She looked down. Craig, her Scottish Terrier with an insatiable appetite, was tucking into what looked like dung. Quickly, she slid the phone back in her pocket and pulled the dog away, chiding him for his disgusting behaviour. Thoughts of the low-flying aircraft soon disappeared with the waning tone of its engines as she knelt down and tried to clean the dog’s muzzle with her handkerchief.

‘Bad boy, Craig! How many times have I told you? I’m fed up cleaning shit out of your mouth.’

The little black animal looked back at her knowingly, head cocked to one side, caring little for her opinion – or anyone else’s, come to that. He liked the taste of horseshit and was already scanning their likely route ahead for more as his owner wiped away the last vestige of mess from his muzzle.


Next to notice the plane was Sam Armour. He heard the high whine of the single engine as he emerged from the cake store located not far from his farmhouse on the very tip of the peninsula.

He removed his flat cap and rubbed his forehead free of sweat with the back of his hand. The opening to the cattle feed store, it seemed, became narrower every year. He patted his belly with a shake of his head as the plane flew past, almost at eye-level as viewed from his position on the mull.

‘Are you seeing that?’ said his wife Karen, walking towards Sam across the yard, her hands white with flour.

‘I hope so. If they go any further, they’ll crash into the town hall spire at Kinloch! I thought the airport would be closed at this time.’

Sam looked at his watch. ‘You’re right: it will be by now. Och, who knows? Everybody and his friend has one o’ they planes these days.’

‘We don’t. Mind you, the bother you’ve got getting in and out that cake store, I’d hate to see you trying to fit into a wee plane like thon.’ She smiled. ‘I’ve got scones jeest about to come out the oven. I know how you like them warm wae melted butter.’

‘Aye. That’s why I canna get in the cake store.’

The pair trudged back to the farmhouse as the sun began to sink into the ocean in a flurry of rainbow colours ranged across the sky. Soon, the whine of the aircraft’s engine faded on the still, sweet air.


Wilma Cairns was driving too fast on the little single-track road that was a shortcut from her boyfriend’s house back home to her parents’ on the outskirts of Kinloch. Loud music thumped in the small but powerful red Mini as she swung the car into a long bend in the narrow road. She and Colin had been at the beach all day, and her tanned skin radiated the warmth of the sun. There was sand between the toes of her bare feet, but she liked the feeling, as she did that of driving with no shoes. The summer was heaven.

So loud was the music in the car that she jumped in her seat and slammed on the brakes as a plane, seemingly only feet above, filled her windscreen.

Wilma looked to her left. The plane was rocking in the air, its wings swaying like the pole of a tightrope walker, desperately seeking balance ahead of landing. She could see along most of the length of the runway at Machrie airport. There were no landing lights, which was unusual. She gasped, hand to her mouth, as the plane touched down. It bounced a couple of times, then rose back into the air once more before landing again, this time its wheels firmly planted on the tarmac but slewing to the right. It bumped across some rough ground – an emergency run-off area – before being brought to a halt by a chain-link fence, which it all but demolished.

Hand trembling, Wilma took the mobile from the tray just under the gear stick and dialled the emergency services.