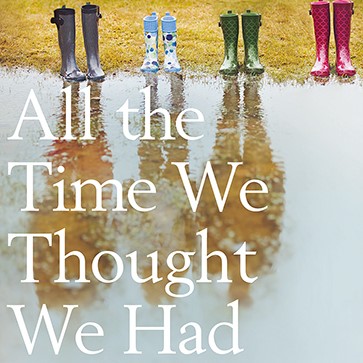 All The Time We Thought We Had is a profoundly moving memoir by Gordon Darroch, whose wife Magteld died after a two year battle with breast cancer, just weeks after they had moved to her native Netherlands. This book also describes the challenges of raising two sons with autism during this heartbreaking time. The below extract was chosen for Autism Awareness Month, and recounts Gordon and Magteld’s experience seeking a diagnosis for their son Euan.

Extract from All The Time We Thought We Had

I told Magteld. We were concerned but also relieved that someone else had noticed. Because in truth, Euan’s habits weren’t always so endearing. His speech development seemed to have stalled. His habit of singing by the radiator while his breakfast sat neglected on the table was setting us on edge. He responded to questions with blank stares or bypassed games of pass-the-parcel to absorb himself in the workings of the CD player. His days were built around obscure pernickety routines, and any deviation could precipitate a furious, limb-twirling rage.

Autism is unfairly blamed for wrecking marriages. Yet the seeping realisation that your child is fundamentally different has a coruscating effect on a relationship. Parenting is a middle-class bloodsport, and the sight of your child lagging behind in his development brings on feelings of shame and disappointment. Euan’s autism placed an extra strain on a relationship that had started to fray. We blamed ourselves, and blamed each other. It was easier to believe that his behaviour was caused by bad parenting than accept that his brain was wired differently. Why did Magteld insist on replying for him when someone asked a question, without giving him a chance to speak? Why wasn’t I taking him to sports clubs at weekends so he could run about with other boys?

The nursery manager said a formal assessment of Euan could take several weeks. In the meantime we decided to blunt the sense of helplessness by consulting a private therapist. I drove to her house and watched Magteld lead Euan inside a whitewashed bungalow halfway up a hill in Glasgow’s genteel outer suburbs. When I collected them at the end of the appointment Magteld was standing in the door way saying goodbye as Euan tugged at her hand. She walked to the car carrying a blue brochure and with a broken smile on her face. I noticed her eyes were moist. When she got into the car I saw the words Autism Spectrum Disorder on the cover of the folder. It was our first encounter with the term.

Magteld had burst into tears when the therapist pronounced, after watching Euan play for an hour, that he was almost certainly autistic. A full diagnosis would take months. We looked at each other in numb disbelief as Euan blissfully kicked his legs in the back seat.

A creeping fear overcame us. The future was an unlit pathway through a dark wood. If it took a roomful of experts to diagnose autism, how could we possibly cope with raising a child with this condition? Who would love and care for him when we were no longer there? We studied websites, scoured newspaper articles, sounded out friends whose friends had autistic children, and waded through piles of leaflets. Comfort was in short supply. At its worst it was blatant quackery, offering miracle cures in return for our life savings, the cost inflated by middle-class guilt: how will you live with yourself if you don’t lay down everything you have to banish the demons of autism?

It took another eighteen months for Euan to be diagnosed. A team of specialists observed him for three days in a nursery environment, carrying out a series of structured assessments under the cover of playing with him in a clinical version of The Truman Show. The outcome was a three-page report culminating in a pithy last paragraph that defined Euan as having what was then called ‘classic autism with learning difficulties’.

The news was handed down by two paediatricians sitting across a low circular table from us in a coldly lit clinical room. The autism diagnosis was a blow to the stomach, but at least we were ready for it. ‘Learning difficulties’, on the other hand, was a flying kick to the groin.

At home I sat on the staircase in the gloom of a January afternoon and cried silently. The diagnosis had been beyond our worst imaginings. There was light on the woodland path-way, but it brought no warmth.

Autism didn’t destroy our marriage, but it revealed the neglected corners, the cracks in the foundations and the crumbling walls. It was also our first encounter with grief.

At first sight it may seem perverse to grieve for a child who is alive and healthy. But, as Jim Sinclair observed in his essay ‘Don’t Mourn For Us’, grief is a common reaction among parents whose children are diagnosed with autism. Working through it is part of the process of acceptance, which is why many quack therapists depend on locking parents into the grief cycle in order to persuade them that their worthless treatments will restore a child who never truly existed.

Sinclair contended that parents of autistic children grieve not for the child they have but the one they wanted. ‘It isn’t about autism, it’s about shattered expectations,’ he wrote. The inquisitive toddler, the sociable ten-year-old, the precocious teenager, the student turning up every third weekend with a sackload of washing, the young man or woman striking out on the path of job, home, car, partner. Much family tension has its origins in those moments when children deviate from this prescribed route, but for most parents the adjustments are small and gradual. Autism, by contrast, arrives early on like a ten-ton weight dropping from a clear blue sky.

At first I scolded myself for grieving. Why were we mourning a child who needed our unconditional love and attention? But all this did was trigger feelings of guilt, which compounded the grief. We had to abandon our aspirations and learn to accept Euan and Adam for themselves. It taught me a lesson I would rely on later: that grief is a healing process, a way of coming to terms with catastrophic changes that are beyond your control. Without grief we have only anger, hopelessness and despair. Grief hurts, but refusing to grieve does even worse damage.

It took time to acquire the patience our children needed. It started by acknowledging that the burden fell on them, not us, and our job was to guide them. Not to scorn or shun or straighten or ‘cure’ them, teach them to mask their autism or try to fit them into a different mould. They needed to be nurtured, not exorcised. However hard it felt for us, and it was sometimes grindingly hard, we constantly reminded ourselves that if we faltered, they would fall. And this was the second lesson I learned: nobody has to suffer from autism, but without the right support, autistic people can, and do, suffer terribly.

When Magteld was diagnosed with cancer, Miss Winter had warned her to be alert for peddlers of bogus cures. Magteld laughed for the first time that day and reassured the surgeon that autism had immunised her against quackery. Cancer shamans employ the same false certainties, duplicitous language and fear dressed up as hope, the same grief-farming chicanery. We understood from the start that her treatment was going to be long, painful and exhausting. We knew there would be no miracle cures; we had to embrace uncertainty. All Magteld could do was keep taking the pills and live every day as if it wasn’t her last