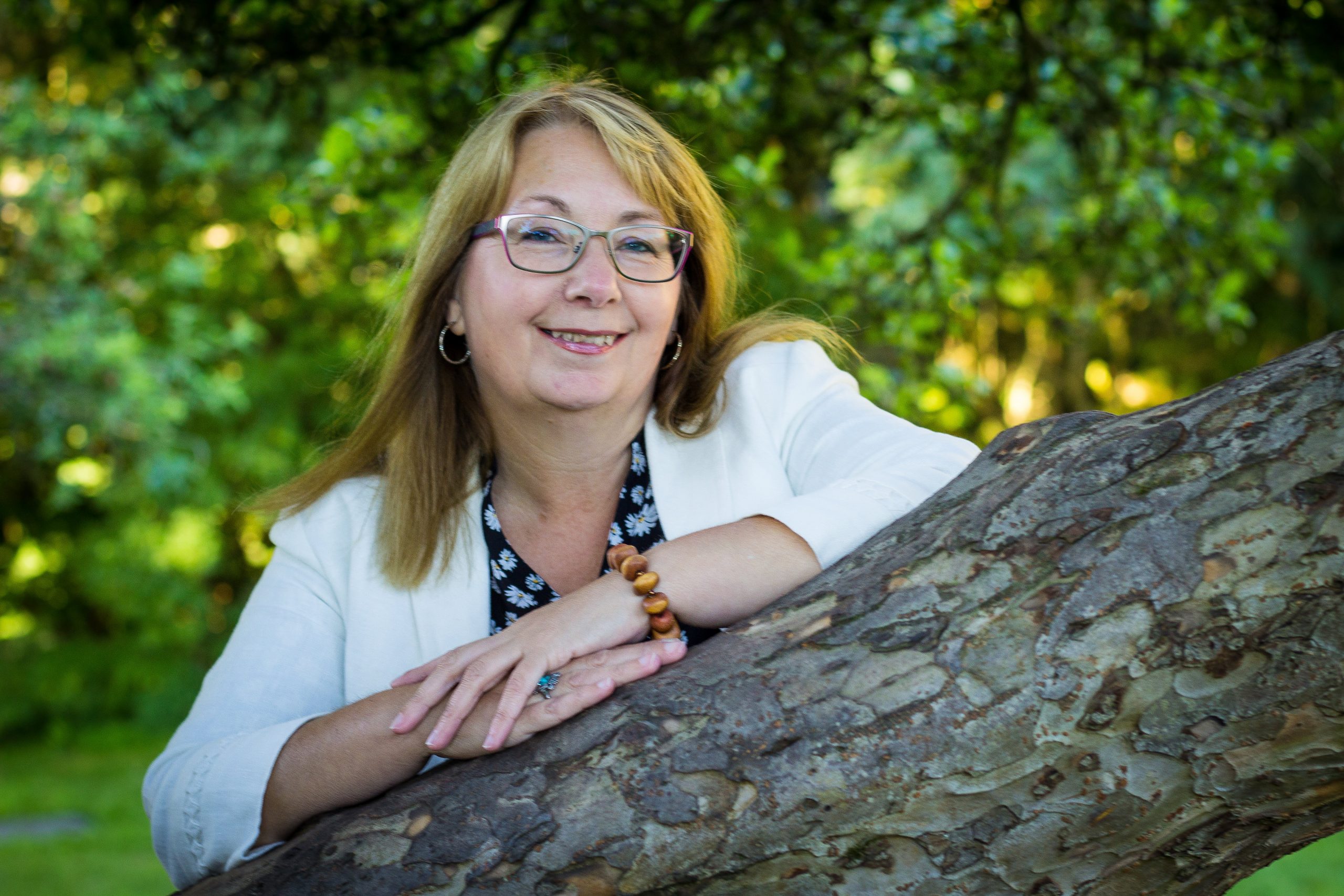 Sandra Ireland was born in Yorkshire, lived for many years in Limerick, and is now based in Carnoustie.

She began her writing career as a correspondent on a local newspaper but quickly realised that fiction is much more intriguing than fact. In 2013 Sandra was awarded a Carnegie-Cameron scholarship to study for an MLitt in Writing Practice and Study at the University of Dundee, graduating with a distinction in 2014. Her work has appeared in various publications and women’s magazines.

Her debut novel Beneath the Skin was published with Polygon in autumn 2016, and her new book Sight Unseen (her fourth!) will be out in summer 2020.

Sandra took time out of writing her next book to answer some questions for us.

Which is your favourite character out of all the ones you have created, and what makes them so?

I like Alys in my debut Beneath the Skin. She can be pretty hard to take, and most readers find her a chilling! When I was creating her, her vulnerabilities began to jump out at me in a way I wasn’t expecting. I’d set out with Alys as my ‘villain’ but I soon realised that she is a victim too. Like Walt, the main character, she is damaged and that defines a lot of her actions. I hope readers will see ‘beneath the skin’ of the character and cut her some slack!

Which book has been your favourite to write, and why?

That’s difficult, because they are all quite different, but I would have to say I have a soft spot for Sight Unseen, which will be out later this year. Sight Unseen is the first book in my new Sarah Sutherland series, and creating a cast of recurring characters has been quite exciting. It’s given me the opportunity to explore all their layers and I’ve become very fond of them! The overarching theme of the series is family; the highs and lows, notions loyalty and duty. I think this is quite timely in our present situation, when the welfare of children and parents is now our prime concern. In Sight Unseen, Sarah Sutherland is doing the best she can to cope with her elderly father and her backpacking daughter. Like my other books, it is dark and twisty with an undercurrent of folklore, but it is also warm and funny, which was a pleasure to write.

If you weren’t a writer, what would you be doing?

I think I’d be an artist. I started writing seriously when I went back to university as a mature student. I chose to do a degree in English and Creative Writing, but I would have loved to study fine art. I like to sketch, it’s really therapeutic, but I have to make myself do it, because it feels like a bit of an indulgence. I did work for a spell as a heraldic artist, which was really interesting. I’d love to do something like that again, or any form of illustration.

I’m not very disciplined when I’m at home, so I usually go out to my local hotel or coffee shop to write. It’s quite strange, because my house is so quiet, you’d think it would be the perfect space. I seem to be able to work better with a certain background babble and the movement of people. I don’t find it at all distracting. So generally, I would do that mid-morning. I lose the creative vibe about 3pm. I’m hopeless after that. I’m very much a morning person!

Which are your favourite Scottish classics?

I love the usual suspects- Lewis Grassic Gibbon’s Sunset Song and Nan Shepherd’s The Living Mountain. I like Sir Walter Scott’s poetry and I want to read The Antiquary, some of which he wrote at Hospitalfield House in Arbroath, just down the road from me. I like Muriel Spark and I think James Robertson’s books will be the classics of tomorrow, especially The Testament of Gideon Mack and Joseph Knight.

What’s the best thing about being a writer?

Having opportunities I would never have had otherwise. The books are actually a tiny part of the whole business of being an author, but they are key to opening doors. I really love teaching and mentoring new writers. I do lots of different creative writing courses, both freelance and on behalf of Lifelong Learning and other organisations, and I’ve met so many lovely people through those. I’ve also attended writing festivals in India, Iceland and in the UK. I love events- nerve-wracking but very rewarding, especially when readers say they’ve enjoyed the books! I quite enjoy the challenge of getting creative with events and signings. My Carnoustie launch of The Unmaking of Ellie Rook was held in a local restaurant. We had bespoke gin cocktails and tapas! I like to take books to people who might not be the target audience.

What’s the worst thing about being a writer?

The only downside is that it’s quite a precarious occupation. We only have to look at the current situation to see that. All the usual venues for writerly events such as bookshops and libraries are closed and festivals cancelled. Sometimes, the act of promoting a book can be quite tiring, and my calendar is usually pretty full with events and writing commitments. However, I don’t think any of us will be complaining about being busy in the future.

How are you getting on in isolation? Is it affecting your writing?

Yes, it is. I’ve had this conversation with several of my fellow writers and we all agree that the constant anxiety is not conducive to writing. On the other hand, I think it’s really important to be creative. I’ve been posting little writing prompts on Instagram (you can follow me here) and a few folk are joining me in this, just as a way of looking after our mental health. Sometimes spontaneous writing can be a great escape, but working on my current project is very slow, sadly. I’m hoping that I’ll settle into the ‘new normal’ and get back into the swing of things. Other than that, I’m okay and doing as I’m told!

Which books are getting you through these strange times?

I am getting together with a few friends on Zoom for a weekly reading group. We ‘meet’ at a designated time to discuss the book in hand which is The Murder on the Links by Agatha Christie. I love Christie, she’s a great storyteller. I’m also halfway through Where the Crawdads Sing by Delia Owens and I can’t resist an audiobook for when I’m out on my regulation walk! I’ve just listened to The Thirteenth Tale by Diane Setterfield (narrated by Jenny Agutter) which was just my cup of tea. Very Gothic!

Sight Unseen, the first in the Sarah Sutherland series will be out in summer 2020 and you can watch the exclusive video below of Sandra Ireland reading an excerpt from the novel. Pre-order it on our website here and browse all of Sandra’s books here.

In Edinburgh, we are incredibly fortunate to have the deep-shelved stacks of the National Library of Scotland – filled with rare manuscripts and...
Read More
From books exploring the interwoven history of tea and Scotland to the rise of China’s surveillance state, we have a range of brilliantly...
Read More
At Polygon we are proud to publish a wide range of crime writing from bestselling authors and exciting new voices. Our 2021 line-up includes...
Read More