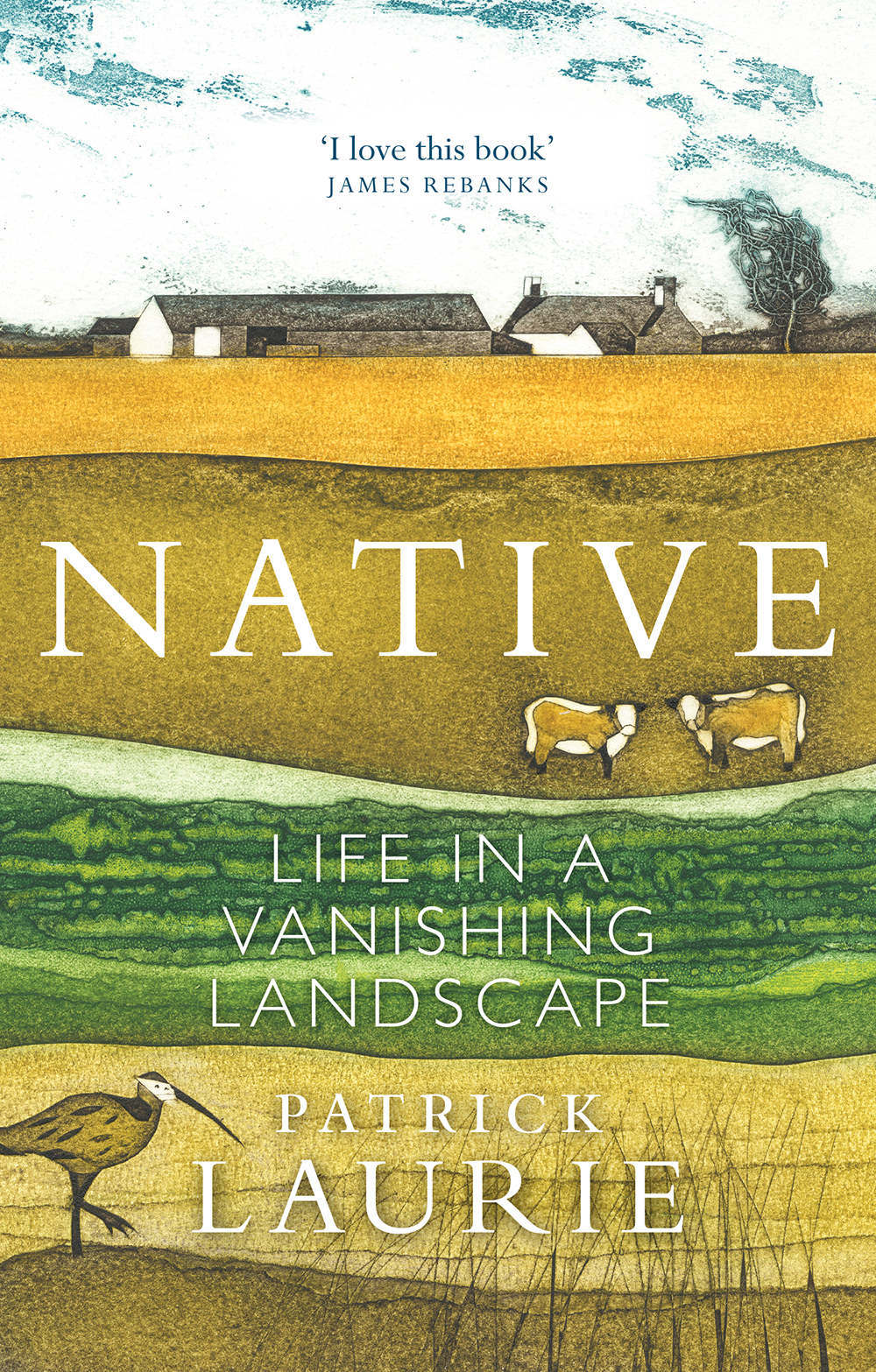 The BIRLINN publicity team is delighted to release details of just some of the highlights coming up in the first half of 2020 in fiction, non-fiction, poetry and children’s titles. Sports and Academic to follow:

Not a wildlife book but a book with wildlife at its heart, not a memoir but a living account – a deeply moving account of hill farming in Scotland from a new generation of farmer.

Patrick Laurie plunged into hill farming after University. His father and grandfather before him had farmed these hillsides, but he chose to invest in the heritage breeds of the region’s world-famous cattle, discovering how they shape the local biodiversity, landscape and culture. This is his account of life in a vanishing landscape, where much has been lost, but small victories may still be won. It’s a poignant book that weaves together tradition and progress. In response to an early proof of the book, James Rebanks, the Lakeland shepherd, said that Patrick Laurie had written ‘a hymn of love to his native land’. That land is Galloway in South West Scotland.  Malachy Tallack commented ‘In this tender, lyrical book, Patrick Laurie considers what it means to really belong to a place. Throughout, the mud, blood and sweat of the farm are brought vividly to life, and each sentence is charged with passion for its subject.‘

The Only Gaijin in the Village: A Year in Rural Japan by Iain Maloney (Polygon, SPRING)

Aberdeen-born Iain Maloney lived in Japan for over a decade before he and his wife Minori moved to a rural village, where he was the only foreigner (gaijin). The culture shock was new and unexpected. His activities, from amateur farming to basic gardening, were conducted under the watchful eye of elderly neighbours and his sceptical wife. And the people were the least of his problems. A look at life in Japan beyond the neon-lit cities and cherry blossom – it’s not easy being the only gaijin in the village.

Putting the Tea in Britain: The Scots who Made our National Drink by Les Wilson (Birlinn, JULY)

New from award-winning television producer and author of the Saltire History Book of the Year 2016 – The Drowned and the Saved – comes the extraordinary story of how Scots brought tea to Britain and made it our national drink. Beginning with the audacious Scot who risked his life to smuggle the first precious tea plants out of Imperial China the story winds through Darjeeling, Ceylon and Africa and finishes with the recent development of tea plantations in Scottish hills and glens. It’s a tale of thrilling adventure and remarkable fortunes but Wilson also reveals the dark side of our daily cuppa – with its origins in slavery, racism, deceit and environmental exploitation.

Riders on the Storm: The Climate Crisis and the Survival of Being by Alastair McIntosh (Birlinn, MAY)

A major new work from one of Scotland and the world’s leading environmental campaigners, this is a hard-hitting book which argues that the challenges of climate change can only be overcome by a profound and radical rethinking of what it means to be human. We need to transform our spiritual and psychological selves if we are to have a chance of survival as climate change changes societies. Where so much written about climate change is despairing, this books gives an unusual, demanding and ultimately inspiring and hopeful path to a new existence.

Author of The Cairngorms: A Secret History, Patrick Baker brings us a remarkably rich fusion of travelogue and historical narrative as he threads themes of geology, natural and social history, literature, and industry from the wild places of Scotland that he visits. He discovers connections between people and place more powerful than can be imagined. The FT said of his last book: ‘Baker illuminates the bleak landscape, revealing the many stories linked to its ruined bothies, ancient gem mines and even haunted summits‘.

Hot on the heels of his award-winning Soul Trilogy, author and broadcaster Stuart Cosgrove tells the story of those ‘missing’ weeks of 1964 between Cassius Clay and Muhammad Ali, when the legend was known as Cassius X. With his eye for detail and knack for drawing wider cultural and political contexts (including soul music) into the story, Cosgrove tells of Malcolm X visiting Clay in Miami, Clay’s embrace of the ideas and attitudes of Black Power, his friendship with Sam Cooke, posing with the Beatles and his relationship with Dee Dee Sharp – all as he is about to be transformed into the greatest sportsman of all time.

Hedy’s War by Jenny LeCoat (Polygon, MAY – published on the 75th anniversary of the liberation of Jersey in 1945)

Based on an extraordinary true story, this debut novel is a tense, emotional story of forbidden love and survival against the odds. In June 1940, the Channel Islands became the only part of Great Britain to be occupied by Hitler’s forces. Hedy, a Jewish girl who fled Vienna, finds herself trapped once more. In her struggle to survive the Occupation she finds work (remarkably) with the German authorities, embarks on acts of resistance, and (more remarkable still) falls in love with German lieutenant Kurt Ruemmele. Author Jenny Lecoat was born in Jersey and has had a long career as a feminist stand-up comic, a journalist and screenwriter.

A Day Like Any Other by Isla Dewar (Polygon, MAY)

Lifelong friends Anna and George meet every week in Edinburgh to remember, to sigh, laugh, and reminisce about their moments of glory, guilt, and mischief. Isla Dewar brings her trademark humour, insight, depth, and honesty to this tale of small events in everyday lives. Anna is reluctant to look after the boy across the road because she doesn’t ‘do’ children; George sets out to rediscover a place from her past. This is a story about beginnings merging with endings and how you can feel old and young all-at-once.

In new CRIME WRITING Polygon will publish Doug Skelton’s The Blood is Still in which Highland Chronicle reporter Rebecca Connolly deals with bodies springing up on Culloden moor (March); bestselling powerhouse Denzil Meyrick returns in June with the eighth DCI Daley mystery,Jeremiah’s Bell ­ for whom does it toll? Sandra Ireland launches the Sarah Sutherland mystery series with Sight Unseen (July), blending local lore with modern life with her signature panache. We welcome Bloody Scotland co-founder Gordon Brown to the fold in the guise of Morgan Cry, Thirty-One Bones, a thriller set on the Costa Blanca with a colourful cast of double-crossing characters. Take a trip to the Costa del Crime this summer (June).

April 27th is the 100th anniversary of poet Edwin Morgan’s birth. To mark this, Polygon will publish a box set of five small volumes, the Edwin Morgan 20s (£5.99 each or all five for £20). Each volume deals with a theme in Morgan’s work and is introduced by a renowned author: Jackie Kay introduces Love; Liz Lochhead Scotland, Ken MacLeod, Space and Spaces; Michael Rosen, Menagerie, and Ali Smith introduces his poems about people in Take Heart

A new collection of poems by Andrew Greig. Lyrical and direct, the poems take place in Glasgow, Auckland, Orkney, across the Highlands and Lowlands, crossing the distance between writer and reader, between one person and another to register the magic and loss of living and loving. Author John Glenday calls it ‘a whirlwind tour de force…the triumph of this book is the way it presents both cheerful retrospective and lively prospective’.

And my Heart Crumples Like a Coke Can by Ali Whitelock (Polygon, APRIL)

Queen of the Birds by Karine Polwart and Kate Leiper (BC BOOKS, JULY)

The multi-award winning songwriter and musician and one of Scotland’s finest illustrators reunite to produce this new take on a traditional tale. The Kingdom of the Birds is looking for a leader: who will it be? The bird with the loveliest song, the brightest plumage, the one who flies highest? All across the sky, they flock together, nightingales and robins, barn owls and blackbirds. The eagle, curlews and cuckoos and herons and hoopoes. And wee Jenny Wren.