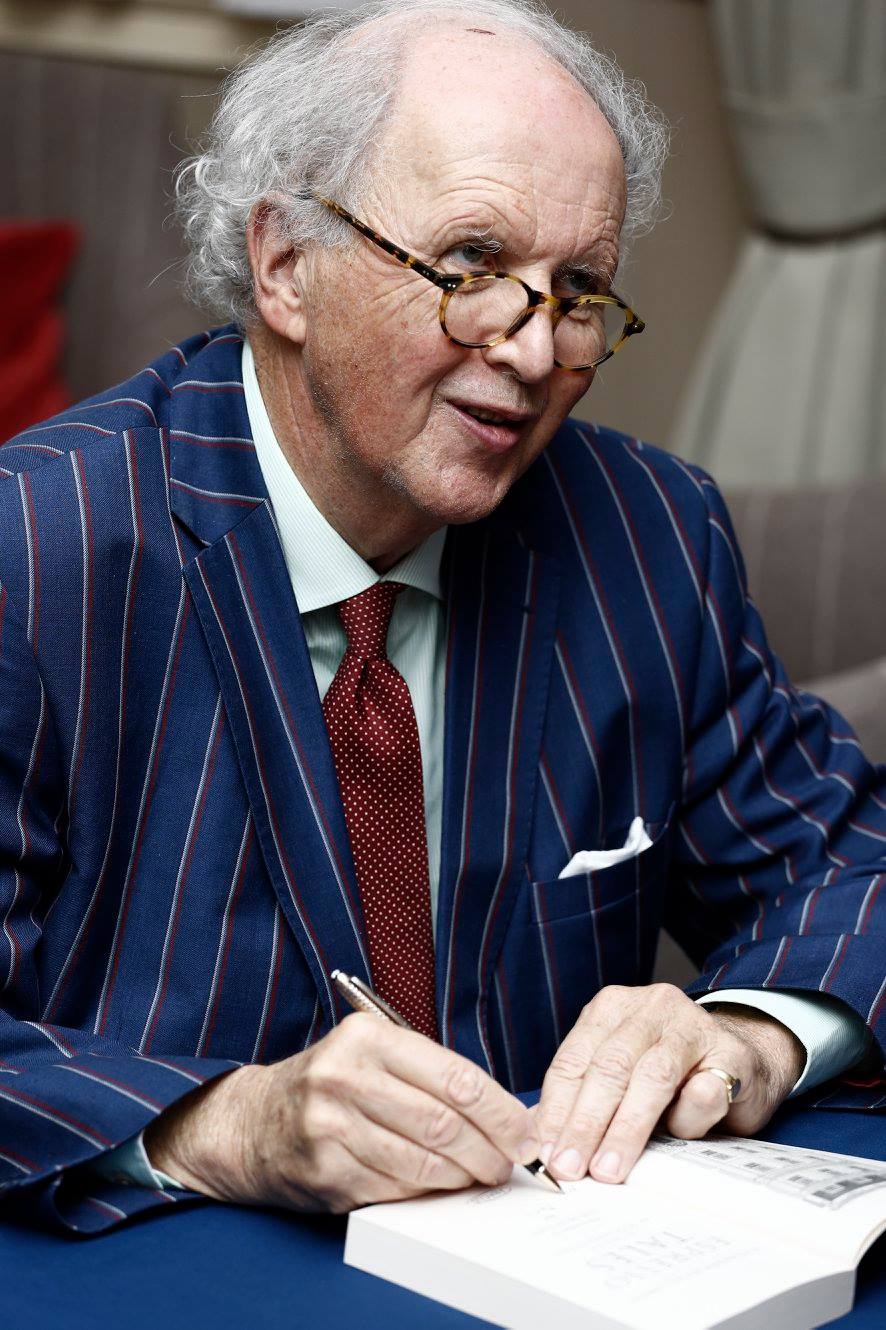 I have worked with Alexander for more than 20 years – as publicist working across his UK publishers and alongside his international publishers.  As you might imagine, the job is a delight – incredibly busy and challenging yes but full of laughter and drive and imagination. I’m always conscious of how great a privilege it is to work with the great man. I am also in awe of his boundless energy!

Together with my colleague Anna, I programme events, arrange interviews, place extracts and short stories, commission adverts and arrange promotions, maintain the website and social media platforms and look after what might be called ‘special projects’ – opera involvement, the Great Tapestry of Scotland, commissions for the BBC and so on and so forth. We also work with Alexander and his PA to respond to reader letters and emails and marketing enquiries.

Alexander is the hardest working author I have ever come across. This year alone he has published 4 new hardback novels in the UK and two children’s books (alongside the paperback editions of last year’s hardbacks which still require promotion). He writes three press columns a month, short stories and articles for all platforms and travels the world to meet his readers.

Last week, we were on a UK author tour. We started out on Tuesday 8 October, driving down to Biggar in the Scottish Borders where we stopped for an afternoon book-club tea organized by Atkinson Pryce, the local independent bookshop. Alexander spoke to 70 readers at a delightful event – and the scones were delicious! Thank you readers, bookbuyers, booksellers (and bakers!) of Biggar.

Tom – Alexander’s regular driver – drove us on to Carlisle in the North of England where Alexander spoke to Serena Field (of the BBC) at a Borderlines Book Festival event. The event was packed-out with extra seats around the perimeter of the ballroom. The hour-long event delighted the audience and his infectious giggle was taken up and rippled around the room. Serena is a gifted in-conversation partner asking gently probing questions about the characters, the writing and publishing programme, what might happen next in the life of our favourites and where their real-life creator was heading after Carlisle.

The answer to that last question was – South! The following day we took an early train to Newcastle (with Alexander working on his next column and discussing book titles on the phone to editors in London and New York) and a car from there to Durham. TV, stage and radio writer and producer Michael Chaplin chaired a large event at the Gala Theatre in the city centre, for Durham Book Festival. What a hard-working team they have at this festival. Several weeks before opening, their main venue was pronounced unfit and they had to rehome 20 large-scale events. Still they greeted us with great cheer and looked after us well. The theatre was busy and Alexander had the additional joy of meeting the real Freddie de la Hay, the Pimlico Terrier from the Corduroy Mansions series, when the owners of the little dog brought him into the venue. Some years ago, the Canadian publisher had spotted a photograph of this adorable terrier online and tracked down the owners to ask if they might use his picture on the front cover of their edition of the book. And here he was in real life. Alexander was delighted to meet him – and his owners!

Then back up the road to Newcastle for an evening event at the early 19th century Lit & Phil Library, a stunning private library housing some 170,000 books – beautifully curated – in the heart of the city.

Alan Taylor, journalist, critic and best-selling author was in conversation with Alexander and together they entertained a capacity gathering in the august surroundings with talk of Bertie, Mma Ramotswe, the second worst restaurant in France and Ulf Varg.

Thursday was a very special day. We took an early train to London and a taxi to Montcalm Hotel for a meeting arranged by the Botswana Trade Centre. Alexander was introduced to Bogolo Joy Kenewendo, a leading economist and the Cabinet Minister for Investment, Trade and Industry (the youngest female elected politician in Botswana when she took office in 2016) and to His Excellency, Rev. Dr John N. G. Seakgosing, the Botswana High Commissioner to the United Kingdom.  After a reception serving a choice of Champagne or Red Bush Tea, Alexander engaged in an on-stage conversation with Bame Moremong, Executive Director of Brand Botswana – a very gracious and impressive woman who juggles studies for an MBA with work and motherhood.  Her Instagram page carries the line ‘Receptive to everything life has to offer‘ – an inspirational and positive message that seems to run through everything she does.

Bame Moremong commented in their discussion that her country was ‘a nation of eternal sunshine’ and said that the ‘Botswana story is a very special one’ and ‘Mma Ramotswe is a treasure for all in Botswana as they try to broaden their footprint in the world… we too want to own our story and share it. It should be heard loudly and proudly.’ She mentioned that Alexander ‘was one of the main people who had profiled Botswana in his books since 1998. One of the people who had promoted Botswana most in the world and to the world.’  She went on to say ‘we wish to recognize your work in The No.1 Ladies’ Detective Agency and thank you. Alexander commented that  ‘I’m conscious that I am an outsider, writing about someone else’s country… I respond warmly to the culture but I’m conscious of the limitations of my understanding. I hope I don’t make too many mistakes. It is unfortunate when people from outside write negatively about Africa. It is the same in Scotland. Writers can focus on the violence and the negatives rather than the positives. But Botswana is a good news story. And you can be proud of what has been achieved since 1966. There are many bad stories in the world. This is a good, true story.’

As a country we will always be in debt to you

As they concluded their conversation Bame said ‘As a country we will always be in debt to you. The fact that you came here is testimony to the special place Botswana has in your heart.’ The Cabinet Minister and High Commissioner then presented Alexander with an engraved wooden picture of himself from Botswana – a gift that truly moved him and which he will treasure.

This conversation was followed by a lunch prepared by Chef Joseph Seeletso, a celebrity chef from Botswana now working in Poland to raise awareness of Botswana’s cuisine – ‘Food creates a language that every human understands. It brings people together. It creates love.’

Alexander was humbled by the welcome he was given by all of the representatives of Botswana both in official capacities and as members of the audience. For me, having worked for so long with Mma Ramotswe and with Alexander, this colourful, stylish and really enjoyable event was an honour to attend and I felt more determined than ever to make it to Botswana.

But at 4pm we had to leave and make our way to Wimbledon Common for an evening event with the Wimbledon Book Festival (and not a Womble in sight), chaired by old friend Al Sentar.  This time the theatre was in tented accommodation, on the dark common, beautifully decorated with William Morris pattern fabric, and again packed to bursting point. A long day but a very good day for all involved.

On Friday Anna took over with Alexander and I made my way into central London for meetings before heading north in the evening back to Edinburgh. Anna and Alexander carried on by car to Andover for a delicious home-grown and home-made lunch before an event with Bookaid International at Books at the Barn. A wonderful event with a sell-out audience.

And then… a much-delayed ferry – thanks to high winds and rough seas – over to the Isle of Wight and a reception at the Cowes Royal Yacht Squadron followed by an authors’ dinner. This was a real highpoint for Alexander and for Anna – both very keen and experienced sailors.

On Saturday Alexander entertained a warm and welcoming island audience. Here he was in-conversation with Andrew Lownie (author and agent) as part of the Isle of Wight Literary Festival before heading back to the ferry and onward to the Dorchester Literary Festival.

No respite yet! Sunday and Alexander was off to Cheltenham for the much-loved-by-readers Sunday Festival Lunch at the Daffodil Restaurant. The Daffodil is a converted art-deco cinema that has kept much of its original charm and Julie Wheeler led an engaging discussion criss-crossing through all the books published this year.

The final event of the week was an up-close-and-personal event to mark the 20th book in The No.1 Ladies’ Detective Agency series. By this point Alexander was obviously feeling a little de-mob happy. When asked “Would you like to read a bit of the latest book?” he replied,

“Yes, would you like me to read it out loud or just to myself?”

And then continued by saying,

“Because I’ve already read it….”

Further hilarity ensued when a member of the audience asked “Were you pleased with the adaptations of your books for BBC Radio 4?”

To which he replied,

“Yes, I was absolutely delighted with them. Because I adapted them myself! I’d give them 10/10.”

Great laughter all round and a lovely relaxed event on which to finish the tour.

This event was much appreciated by Cheltenham Festival’s core McCall Smith fans and members of a bookclub who welcomed the opportunity for a more intimate discussion with Alexander.

We are all back home now and Alexander has a few days to prepare before he sets of again next weekend for his American tour.